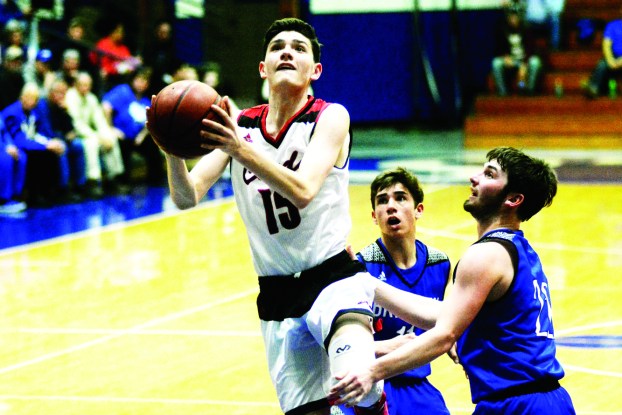 Jared Wellman gets fouled on his drive to the basket iin the second half at the 10th Region Tournament against Bracken County. (photo by Micah Satterly)

GRC thumps Bracken in first round of 10th Region Tournament

The full-court pressure from the Cardinals was too much for the Polar Bears to handle in GRC’s 72-51 win.

Brennan Canada scored a game-high 22 points and said they were able to take advantage of their turnovers.

“We wanted to pressure them full-court to control the tempo,” he said. “We didn’t want to give them anything easy.”

Clark was able to force 11 of Bracken’s 19 turnovers in the first half, capitalizing with 19 points total off Bracken’s turnovers.

Despite Clark’s shooting slump in the first quarter, they quickly turned it around in the second quarter by knocking down threes and a Jordan Graham buzzer-beater that extended the lead to 39-20 going into halftime.

“We have to shoot the ball better, finish lay-ups and all the other basics next week,” Canada said.

Bracken came out on fire to start the second half, cutting their deficit to only nine points leading to a Clark timeout in the third quarter.

“Their shooters got really hot,” Cook said. “They have two really good guards in Tucker and Fisher and I thought they did a great job. Their style of play was spreading us out a little bit. In the end, you got to find a rhythm and our leadership in the fourth got better but still, this was a great first game for us to feel that fire in the region tournament.”

Cook was pleased with how his team handled the adversity of the game.

“One thing I did like about tonight was when we needed someone to step up and get a bucket, we had kids do that,” he said. “In this type of tournament at this time of year you have to have guys that are willing to make plays. It doesn’t matter if you fail, all that matters is the guts it takes to go out and do that.”

Clark will play in the semifinals 6 p.m. Monday at the Mason County Fieldhouse.

By Micah Satterly MAYSVILLE — George Rogers Clark ran Nicholas County off the floor in the opening round of the... read more