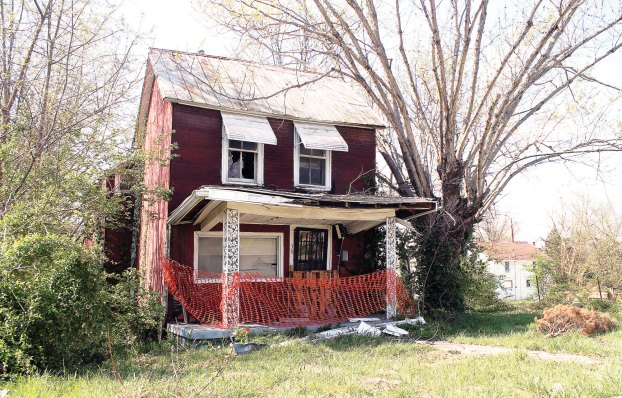 A dilapidated home near the corner of Flanagan and Lincoln streets is one considered when the city applied for a Community Development Block grant to bring new housing to Lincoln Street. (Photo by Whitney Leggett)

A project to renovate and rebuild a run-down block of Lincoln Street took a huge step forward after being awarded a $1 million state community development block grant.

The grant was announced Thursday by the Department of Local Government.

Winchester Mayor Ed Burtner said the first phase of the project would involve one side of Lincoln Street.

“It is good news,” Burtner said. “It will be used for dealing with housing that needs work. We hope it will take care of some unsightly and unsafe properties.”

If the entire project is completed, up to 30 properties would be involved, including a number of vacant or abandoned homes, and the city would need to obtain all the property on the block. Those living on Lincoln Street would be offered relocation assistance.

Most of the structures would be demolished, though a few could be brought up to code.

Seventeen parcels of land would need to be obtained for the project, and the city agreed to donate a lot it owns at 20 Lincoln St.

Property lines would be redrawn to bring lot sizes up to current standards. Habitat for Humanity would also be involved to build seven new single-family homes on Lincoln Street.

New homes would also be built according to federal guidelines, including noise standards from the nearby railroad tracks.

According to DLG, the City of Winchester has committed more than $632,000 to improve infrastructure, sidewalks and to reconfigure the street. Habitat also pledged $400,000 for the project.

“This project will provide clean and safe housing for residents while also upgrading and reconfiguring the neighborhood,” DLG Commissioner Sandra Dunahoo said in a statement.

The city applied for the grant in July.

“This investment and the completed progress will have a significant impact in ensuring affordable housing for families and children who need it most,” state Rep. Donna Mayfield said in a news release.

“These funds will go a long way to ensuring the benefit of home ownership and will yield many benefits to these residents for years to come,” state Sen. Ralph Alvarado said.

The Kentucky General Assembly has been in session since January and two issues have dominated the headlines. One is the... read more