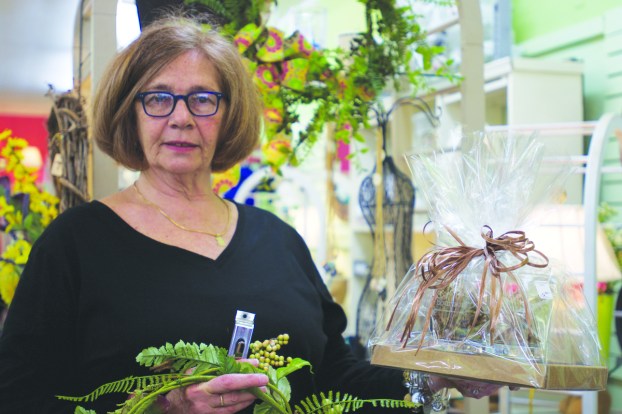 Betty Jane Glasscock shows some of the wares at Court Street Gifts, the downtown business she owns with Anne Baldwin. (Photo by Lashana Harney)

Even on a cloudy day, Court Street Gifts is bright. Colorful pillows are overflowing on a bench in the front of the store, green wreaths hang on display and several mirrors bring balance to the pale green walls.

At the counter, co-owner Anne Baldwin is assembling Easter eggs into a jar, preparing for a spring discount “Eggstravaganza.”

Baldwin, Betty Jane Glasscock and a few other women jumped at the chance to buy the store in 2002. They had previously made jewelry to fund events for their children’s high school senior class, and thought the idea of owning a store sounded fun, Glasscock said.

When the boutique first opened, Glasscock was working as a social worker and Baldwin was a math teacher. But after they retired, the two have been running the store full-time.

Court Street Gifts will have been open for 16 years come July, Glasscock said.

Glasscock said they try to support local artisans and Kentucky Proud products, but they also find items in markets throughout the U.S.

Court Street Gifts features a constantly evolving inventory of gifts for all ages.

They try to stay true to their tagline: exceptional gifts with personal service. The boutique can gift wrap, deliver, ship purchases or complete a gift basket with regional specialties, according to the website.

“I always laugh with bridal registries,” Glasscock said. “I say we do everything but walk them down the aisle.”

Glasscock said they have taken gifts to the shower, to the wedding, just trying to do whatever they can to help their customers. Baldwin said she’s even met customers on Christmas eve.

Court Street Gifts was offered a place on Bypass Road, but the owners didn’t want to move out of their spot, they said.

Glasscock said the shop coordinates with other downtown shops to ensure there aren’t duplicate items being sold in the 40391 zip code.

There’s still a learning curve when it comes to operating a store, though, Baldwin said.

But they’re figuring it out as they go.

The first time the pair went to the market to shop for inventory, together, they spent about $1,000 total.

“We all about had a heart attack,” Glasscock said.

Glasscock said while you can’t get everything in Winchester, you should try to buy what you can locally. It’s hard to get a new customer base being a small business, but they’re trying every avenue possible: word of mouth, social media, and traditional advertisement.

The boutique has recently started offering classes including crocheting, hand lettering, knitting and building fairy gardens. The next class will be March 15 at 6:30 p.m. in the shop. Customers will learn how to do faux watercolor hand lettering.

Looking back now, Glasscock and Baldwin are still amazed they own a store. But after almost 16 years, they are proud to be the owners of Court Street Gifts.

“We were crazy,” Glasscock said.

For now, Glasscock and Baldwin aren’t going anywhere. But one day, when they have to sell, they want to sell to someone who was just as excited as they were.

“I think Winchester needs something like this,” Baldwin said. “So, hopefully, the shop will continue so that people will continue to come downtown.”

Spread throughout the various studios at Dancer’s Pointe, young dancers were learning about technique, style and practicing plies Sunday. About... read more