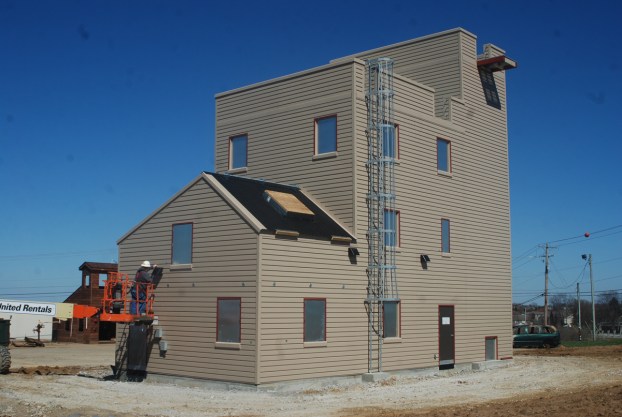 Allen Welch of Art’s Electric works to finish up some exterior electrical work on Winchester Fire-EMS’s new training tower near its Station 3 in the Winchester Industrial Park. Construction on the building began in December. The tower replaces a previous one which was torn down in 2014. (Photo by Fred Petke)

Winchester Fire-EMS Battalion Chief Jason Keller said the department is scheduled to do a walk-through next week with a representative of the manufacturer for a final inspection. Electrical contractors are on site this week doing some installation, but the tower itself is in place.

“I’d say it’s within a week or two of being complete,” Keller said. “We still have quite a bit of site work to do.”

The department has been without a training tower since the previous one was condemned and demolished in 2014. The new facility includes a one-story burn room, a three-story section to resemble a residence and a four-story tower where firefighters can rappel.

It also includes features firefighters could face at other sites around town including exterior cage ladder used in industrial settings and stand pipes like those in Beverly White Tower to fight fires.

The city commission budgeted $575,000 for the project, and the construction is expected to finish $1,406.84 under budget, according to a document presented to the commissioners.

The department also received a $100,000 grant from the Kentucky Fire Commission. Originally, any grant funds would be turned over to the city to offset its cost. Keller said he would ask the city commission to use $80,000 of it for concrete work to the pad and to install drain boxes to handle water runoff from the structure and training. The Winchester Board of Commissioners approved the request during its meeting Tuesday.

The entire project was completed in less than a year. Site preparation began in September and workers began erecting the steel structure for the building in December.

“The final product has exceeded our expectations,” Keller said.

The 2018 Clark County Wellness Challenge may be a great first step to shedding off that winter weight. The challenge,... read more