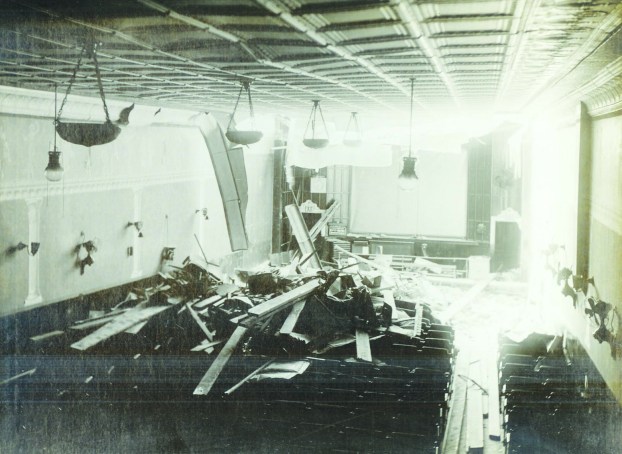 Interior of the theatre as it stood after the roof collapse that killed 11 people and injured many more. Today is the 100th anniversary of the incident. (Bluegrass Heritage Museum photo)

A century later, memories of the Pastime Theater collapse linger

One hundred years ago today, Winchester experienced what many call the city’s worst disaster.

At about 7:45 on Saturday evening, March 9, 1918, as the first feature was playing at the Pastime Theatre, a four-story brick wall of the adjoining building collapsed and fell on the theatre. The steel roof, rafters and bricks came down on the audience killing eleven and injuring approximately 100 persons.

On Thursday prior to the accident, fire had gutted the J. T. Luman Building next door to the theatre. The building was a total loss, and the entire stock of the French Hardware and Grocery Company was destroyed.

In the aftermath of the fire, a high, unsupported wall next to the theatre was left standing.

The Pastime was a two-story brick building on the west side of North Main Street. A one-story extension had been added in the rear a year before. The wall fell on this one-story section, the end near the stage, and the roof collapsed under tons of brick.

The theatre was packed with a standing room only crowd. It was thought as many as 600 people were inside for a showing of “The Quiet Man.”

The Winchester Sun reported “the front rows were occupied by children who, as is their usual custom, occupy the front rows during the comic pictures.” The fatalities and most serious injuries occurred in this area. Others were injured as the panic stricken audience rushed for the exits.

The sound of the crash was heard throughout much of the city, and residents soon began arriving on the scene, joining the fire department, police and doctors.

Ambulances found it almost impossible to get through the crowds. Rescuers faced a major challenge inside, because the damaged area was covered with so much debris.

While rescuers were working inside, police could hardly keep the crowds away from the front of the building, making it difficult to get the victims out. And the police were concerned that the high wall on the street side of the Luman Building might come down with fatal effects.

The first casualties brought out were carried across the street to the office of Dr. Isaac Browne. All the injured eventually were taken to the hospital, the deceased to H.H. Hall’s on South Main or Kerr & Bean on Court Street. The newspaper gave daily reports on the condition of the victims.

The immediate cause of the accident was a wind storm that, fortunately, kept many people away from the theatre that night. It had been raining and blowing all day.

During the afternoon there were reports that the wall of the burned building was swaying in the 60 mph winds. City officials, called in to examine the wall, gave the theatre the OK to open that night.

According to the newspaper account, “All the doctors and nurses of the city were called into service and offered their assistance. The colored physicians of the city were on hand and were assisting … in the efforts to relieve the injured at the hospital and the homes.”

The paper gave a list of the dead and their ages:

The Sun article also gave the names of 21 men, women and children who had been seriously injured. It was thought at the time that several of them would not recover.

Funerals for eight of the victims were on Monday. All local businesses and schools were closed. Another of the casualties, Everett Shindlebower, 33, died at the hospital later that day.

On Wednesday a coroner’s inquest was held with Squire Pace presiding. Witnesses testifying included Mayor H. B. Scrivener, Councilman John W. Wheeler, Newt Powell, building contractor, J. W. Crone, architect, and others. Although several persons had warned of the dangers on Saturday, the jury held no one to blame for the accident.

Citizens rallied round the victims’ families, and over $4,000 was raised for their relief. The tragedy touched many homes in Winchester.

Two of the children, Rosie Azar and Tommy Thomas, were members of the Lebanese community.

Long-time local attorney Michael Rowady later recalled his father had given Tommy the money to attend the movie that night. Mike Butler’s stepfather, Elliot Ecton, then age 10, sustained a serious head injury. Given little hope of recovery, Ecton would go on to serve as Clark County fire chief for 38 years.

Remembering the tragedy, Butler initiated a fund-raising campaign to install a memorial plaque to the victims. He raised $2,200 for the plaque then had it fabricated and installed. A dedication ceremony was held on April 18, 2013. The plaque stands on the sidewalk in front of 24 N. Main St. Thanks to Mike’s efforts, March 9, 1918, is a day that Winchester will never forget.

Michael Rowady, 99, was born nine months after the Pastime tragedy. This week he recalled many details about the accident... read more