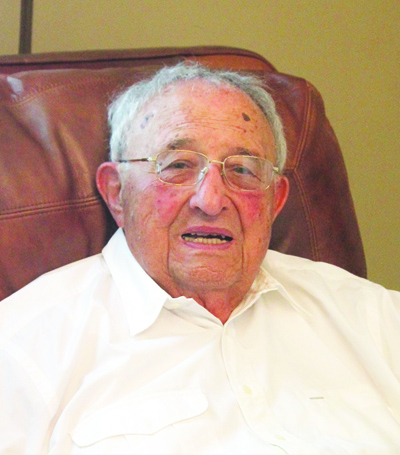 Michael Rowady, 99, was born nine months after the Pastime tragedy. This week he recalled many details about the accident that he learned first-hand from the accounts of his family.

Rowady’s cousin, Tommy Thomas, was one of the victims. Mike’s father gave Tommy a dime for admission so he could attend that night.

“Papa said he always felt badly about that,” Rowady said.

Tommy’s brother, Matry, sat beside him at the theatre. After the roof collapsed, Tommy asked, “Are you hurt?” Matry said, “No. How ’bout you?” and got no answer. Tommy died in the theatre; Matry was taken to the hospital with a broken arm.

Matry had a successful career and was a jack of all trades. In World War II he fought in North Africa and was in the Battle of the Bulge with General Patton. He would graduate from Centre College and had a law practice.

Rowady called him “a man for all seasons.” His sister Helen Thomas was a nationally known journalist and long-time White House correspondent, and his other sister Josephine was Miss Michigan and went to become a college professor.

Rowady remembered Elliot Ecton had been in the audience the night the wall fell. He threw himself over Bud Hamilton to protect him and was seriously hurt himself. In the treatment of his injuries doctors put a steel plate in his head.

On the afternoon before the disaster, Thomas Dunigan, a blacksmith who had a shop on Maple Street, had seen the high wall of the Luman Building waving in the high winds and called city authorities, Rowady said. They did not knock the wall down as some advised, but simply declared it safe for the theatre to open.

Lawsuits against the city were dismissed because local government had sovereign immunity. That law no longer applies in cases of negligence.

To make filling: Combine apples with sugar, flour, cinnamon and nutmeg. Place into crust-lined pie dish. Dot with butter and top with second crust. Bake at 350 degrees for 1 hour and 20 minutes.

At 6:45 a.m. Thursday, about 20 teachers participated in a “walk-in” rally at Justice Elementary School to protest a Senate... read more