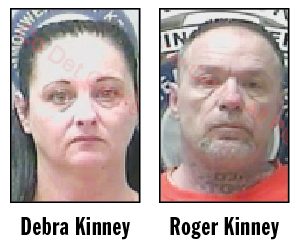 Roger and Debra Kinney were supposed to plead guilty to a 2015 homicide Thursday, but only Roger went through with it.

The husband and wife were charged in connection with the May 9, 2015, death of Darryl Wiseman on their farm on Twin Fork Lane, following an earlier mediation session..

Roger Kinney followed through and pleaded guilty to second-degree manslaughter and tampering with physical evidence, for sentences of 10 and five years, respectively. He also pleaded guilty in a second case involving Wiseman from May 7, 2015, and agreed to serve two years for criminal mischief and being a convicted felon in possession of a firearm.

Debra Kinney, though, balked at pleading guilty Thursday in Clark Circuit Court and said she wanted to fire her court-appointed attorney. After failing a drug test, Clark Circuit Judge Jean Chenault Logue had her taken to jail for violating the terms of her bond by testing positive for methamphetamine and ecstasy.

Roger Kinney said there was a long-standing history between the three, including an affair between Wiseman and Debra Kinney, he said in court Thursday.

On May 7, he said Wiseman pulled a pistol on him and threatened to kill him. Roger Kinney was arrested that night by the Clark County Sheriff’s Office, but escaped after kicking a window out of a police cruiser.

Two days later, Roger Kinney said he and Wiseman were doing drugs when he hit Wiseman with a rock, which caused his death. Roger Kinney said Debra was there and helped him move Wiseman’s body to a barn on the farm, and cover it with a tarp.

Roger Kinney said he left immediately but Debra Kinney continued living on the farm while their children finished the school year, he said. Debra Kinney then joined him on the road, hiding in various locations until they were arrested in Ohio in July 2015.

Clark County Sheriff Berl Perdue Jr. said previously Wiseman was not reported missing and he was known to be gone for long periods of time.

Roger Kinney will be sentenced on April 12 to 15 years, as the sentences in his two cases will run concurrently.

It will be months before anyone will be ready to discuss trial dates for the eight people charged with roles... read more