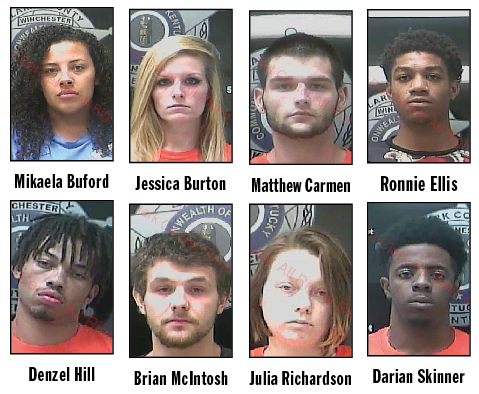 It will be months before anyone will be ready to discuss trial dates for the eight people charged with roles in a gunfight that killed two 16-year-old girls last year.

Assistant Commonwealth’s Attorney Heidi Engel said a number of projectiles from the scene are still being tested at the lab.

“That was turned over to the lab in January,” she said. “They’re expecting several months before that’s complete.”

Clark Circuit Judge Jean Chenault Logue scheduled another hearing for Aug. 16, though it could be moved up if the testing is completed sooner than expected.

Carmen, Hill, Skinner and Ellis were all indicted for two counts of murder and one count of first-degree wanton endangerment. Witnesses said all four fired guns during the gunfight at Washington Street Apartments around 9 p.m. Nov. 7, 2017.

Police said the two victims, Adrianna Castro and Kayla Holland, were caught in the crossfire and died from gunshot wounds.

Police said the shooting followed a verbal altercation earlier in the day which included the victims, Skinner, Hill, Ellis and Buford. Four others were present, but were not involved in the shooting and have not been charged.

Buford is charged with complicity to murder and complicity to wanton endangerment for allegedly driving Ellis, Skinner and Hill to the apartments. Witnesses said the three men got out of the car, fanned out and started shooting. Carmen was in an apartment and returned fire from an elevated position.

Richardson, Carmen’s girlfriend, was charged with tampering with physical evidence for allegedly removing a box of ammunition from the scene.

McIntosh and Burton were indicted for first-degree hindering apprehension or prosecution. They were indicted separately and their cases were continued until May 3

Under the harsh light on stage, students lined up to practice their bows. “Did I shine my shoes?” “Yes, I... read more