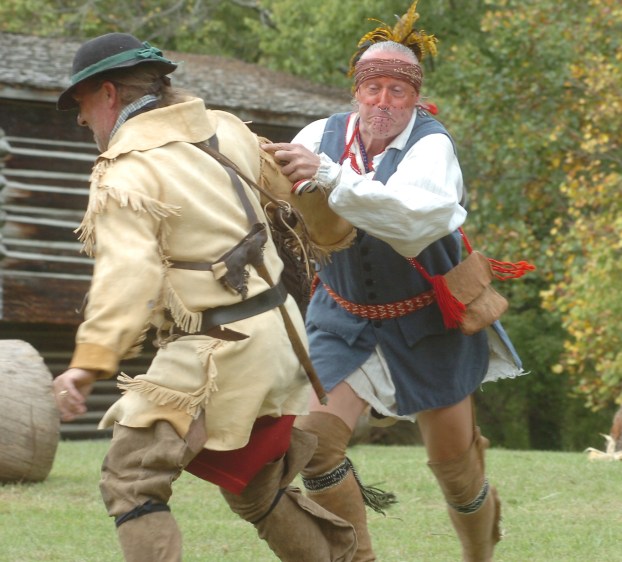 Actors playing Daniel Boone and a Shawnee warrior struggle at the beginning of the siege battle re-enactment in 2014.

Fort Boonesborough State Park is gearing up for its 55th year with the opening of the reconstructed fort next week.

Park manager Rob Minerich said the fort will open for the season Wednesday, April 4, for its regular schedule. It will be open Wednesday through Sunday from 9 a.m. to 5 p.m.

There is a season’s worth of special events, in addition to the weekly Saturday plant walks and other demonstrations at the fort of frontier skills.

There is a full season of special events as well, starting with Women on the Frontier April 21-22. The event will feature both demonstrations and hands-on participation learning all the skills women had to perform on the 18th Century frontier.

The rest of the calendar includes Spring Trade Days on Memorial Day weekend and the annual Gathering of Descendants in June for those whose ancestors lived around the area during the time of the original fort.

During the peak of summer, there will be the “Cool History on Hot days” series on Saturdays in July and August, followed by the annual re-enactment of the 1778 Siege at Boonesborough in late September.

The park itself has its own scheduled events, including a huge car show in October, Minerich said. The pool will open Memorial Day weekend and remain open through Labor Day.

For more information about programs at the fort, visit www.fortboonesboroughlivinghistory.org

About seven years after the new expanded Speedway opened on South Maple Street, the store will be expanding again. General... read more