Fire officials are investigating to find what caused a Sunday morning fire at a house on Mutual Avenue in Winchester.

Firefighters were called to 4 Mutual Ave. at 10 a.m. Sunday to find smoke coming from the eaves of the house, Winchester Fire-EMS Battalion Chief Chris Whiteley said. 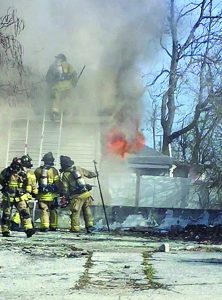 Twelve-year-old JD Anderson submitted this cell phone photo take as she watched firefighters battle the fire at 10 Mutual Ave. Sunday. Anderson wrote, “Me and my sisters saw how amazing and brave the firefighters responded to the fire.” (Photo courtesy of JD Anderson)

The bulk of the fire was contained to two rooms at the back of the house, he said, with much of the rest of the house receiving smoke and heat damage.

Firefighters cut holes in the roof to ventilate the house, he said.

Firefighters were on the scene for about two and a half hours, though investigators remained for most of the afternoon and returned Monday, Whiteley said.

The cause, so far, has not been determined.

He said it appeared no one had lived in the home for several days.

No one was injured while fighting the fire.

For the love of history: Volunteer blends hobby, service at Clark museum

Boo Baldwin has always loved history. It’s part of why volunteering at the Winchester’s Bluegrass History Museum is a good... read more