After 10 years as circuit judge and another 15 as a district judge, Clark Circuit Judge William Clouse said it was time to retire. 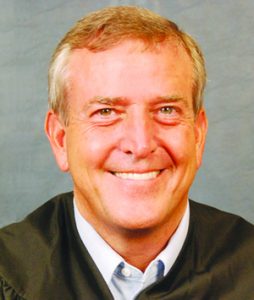 While Clouse officially retired in February, he remains on the bench by special appointment until his successor is chosen by Gov. Matt Bevin.

“I am excited about the three names …,” Clouse said. “I’m tickled. You always want the person following you to be a quality person.”

Bevin has 60 days to make the appointment.

Brown, who lives in Berea, has been a district judge in Clark and Madison counties for nearly 17 years.

Engel, of Winchester, has been an assistant prosecutor in Clark and Madison counties for 20 years.

Jeffrey Walson has been a district judge for 10 years from 1993 through 2003 and retired in 2016 after 13 years as family court judge in the two counties.

For Clouse, it ends more than 33 years in public service, including serving as county attorney in Madison County and serving as a state senator. He was re-elected in 2014 to another eight-year term as circuit judge.

“It’s best for my family,” Clouse said of retirement. I have a brand new grandson and I want to spend some time with him.”

Clouse said being a judge was never his ambition.

“My goal is law school was to get out and represent my clients as best I could and provide for my family as best I could,” he said. “My career has been charmed.”

There is little he won’t miss from serving as judge, including the people he works with.

“I’ll miss the intellectual challenge of it,” he said. “No two days are alike.”

Part of that challenge has been applying the law, whether in serious criminal cases involving murder or rape charges or civil cases.

“You’ve got to divorce yourself from the horrific nature of the case and apply the law,” he said.

T decisions can be as heavy in civil court, particularly with property dispute cases when dealing with someone’s home. The job is still to apply the law.

“That’s what I swore to do and that I tried to do,” Clouse said.

There is still a ray of hope for Kentucky cities, counties, school districts and others even though Gov. Matt Bevin... read more