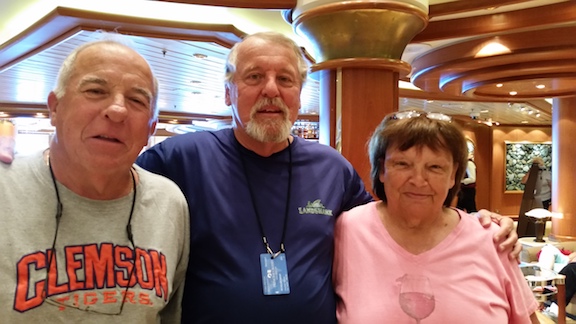 I was walking through the atrium of the Coral Princess — our home for 10 days on our Princess Cruise to the Panama Canal — and I heard someone yell, “Larry.”

No way could that be anybody yelling for me. Had to be meant for someone else. So I just kept walking.

But then came a few more shouts, so maybe it was someone trying to get my attention. I turned and saw a man with a Clemson T-shirt calling, “Larry.”

OK, I knew I didn’t know the man, so it couldn’t be me he wanted. However, he motioned for me and so did the three women with him.

Turns out that Marvin Clary of Charleston, South Carolina, and his wife, Sherry, were indeed looking for me at the request of their son-in-law, Winchester native Morgan Codell.

“We bought your picture so we could find you,” explained Sherry Clary. “We have searched for you for three days.”

Morgan Codell follows me on Twitter and had been keeping up with my tweets about the cruise. He let his in-laws know he had an idea what they were doing thanks to what I was tweeting or posting on my blog.

He asked them if they might track me down and they purchased the picture of my wife and I in Cartegena, Colombia, the ship photographer took so they could recognize me. I was wearing a blue UK hat in the photo and that let them know it was me.

Still, what are the odds of those four finding me in a group of more than 2,000 passengers on the Coral Princess?

They finally decided after three days of searching to stay in the atrium lobby and each look a different direction in hopes I might wander by — and I did.

“Our son-in-law is a big UK fan,” Marvin Clary said. “His parents and brother still live in Winchester and they are all big UK fans, too.”

Morgan Codell now lives in Charleston, South Carolina, and is part of an interesting family sports mix. His wife went to the University of South Carolina and is a Gamecocks fan. His in-laws are Clemson fans.

Has Codell, 36, converted their daughter to a UK fan?

“Kind of, sort of,” Marvin Clary said. “We have kind of a different family when it comes to who we all pull for in sports.”

However, Clary and his wife are not opposed to supporting Kentucky basketball under the right circumstances. Twice they have been to the Bahamas when UK played there.

“Our son-in-law follows Kentucky everywhere. He will follow UK anywhere it plays,” Marvin Clary said. “They (his daughter and son-in-law) paid our way to go to the Bahamas — we are kind of the babysitters for our two granddaughters so he can go watch Kentucky play. But that was fine with us.”

It worked out well for me, too. The Clarys gave us the picture they bought to identify me. In return, they just asked that I post a photo of us together on Twitter for their son-in-law. I did and quickly got a response from him.

Bottom line — there is a UK connection almost anywhere you go even if sometimes it has to search you out for three days to make it happen.

Larry Vaught is the former sports editor of The Advocate-Messenger in Danville.