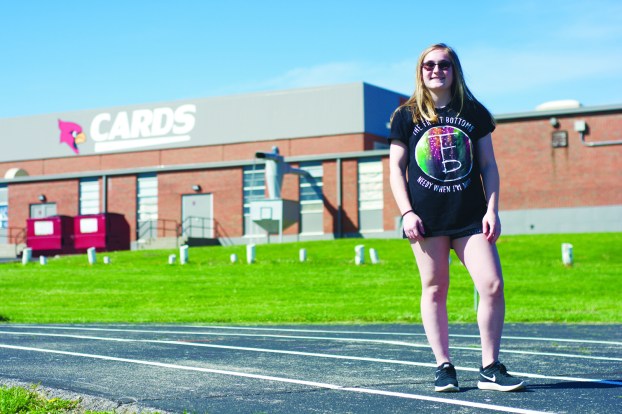 Sarah Vickers was accepted into the Gatton Academy. Next fall, she will move to Bowling Green and take both high school and college courses at Western Kentucky University. (Photo by Lashana Harney)

Sarah Vickers, 15, pulls back her long, blonde hair and denim jacket to point at the symbols printed across the white T-shirt, the subtle reference only noticeable to those who know the song “Peach” by the Front Bottoms.

The shirt is part of an inside tradition between her and a friend. Every year, the pair buys a band shirt for their respective birthdays. Vickers said she’s racking up quite the collection.

She grew up reading Harry Potter and fell in love with Lord of the Rings series after watching “Hobbit” in theaters in the fifth grade. She said she’s a “pretty big fan” of Harry Styles and enjoys watching “Supernatural” or “Psych” in her spare time.

Vickers will stay on Western Kentucky University’s campus and will have the opportunity to take college classes, engage in faculty-led research and study abroad.

At the end of two years, Gatton students will have earned almost 70 college credit hours in addition to completing high school, according to its website.

Vickers said she found out about Gatton at a Duke Talent Identification Program ceremony in the seventh grade.

“As soon as I heard about it, I thought ‘Wow, that’s cool,’ and it interested me as something I could do,” Vickers said.

Vickers was also interested in Morehead State University’s Craft Academy, so she applied to and was accepted into both programs.

For a while, Vickers said she thought she was going to Craft Academy, but ultimately, changed her mind.

“For two or three years, I thought I knew which one I wanted to go to, and a couple of days before (decisions came out) I ended up changing my mind and picked Gatton instead,” Vickers said.

The atmosphere of the people, campus and Bowling Green captured Vickers’ interest as well as the effort and care Gatton staff put into the interview days.

Vickers said she was ecstatic when she found out she was accepted.

“I had just gotten back from track practice, and I knew they were coming out that day, but I wasn’t sure what time that evening,” she said. “So the whole day I had been refreshing my email all through school, all through practice and when I got home, they both came in at almost the same time around 6, 6:30 (p.m.) one after another. So it’s very exciting.”

Vickers said her area of interest is physics and astrophysics. One day, she dreams of working in a research facility, studying space, the stars and all of its phenomena.

She said her interest likely stemmed from her dad, who is interested in aviation and space. He would take Vickers to the planetarium, star gazing and together, they would watch NOVA.

Having done quite a few long summer camps, Vickers said she isn’t worried about spending so much time away from home, though, she is an only child. Vickers said she’ll be back in Winchester at least once a month and on breaks.

Vickers said she hopes to be a strong role model for women in STEM, especially since only about 20 percent of those who hold a bachelor’s in physics are women, according to the American Institute of Physics.

“I’ve been going to girl STEM conferences and various things like that for awhile, I would like to bring a bunch of young girls and show them what all you can do in a STEM career,” Vickers said. “It’s very important, and it’s a good path to go down.”

And when things get tough, Vickers knows just what to do, she said.

For incoming sophomores thinking about applying to Gatton, Vickers said not to procrastinate and just be yourself.

“Try to be as authentic as possible, and don’t be nervous for interview days, cause you’re just sitting down and having a conversation,” Vickers said.

Vickers said she knows Gatton will help her move forward in the college application process.

“I think Gatton will be helpful, but I think it will make me a better person as well,” she said. “It seems like a very good next step, and hopefully, I’ll come out of it for the better.”