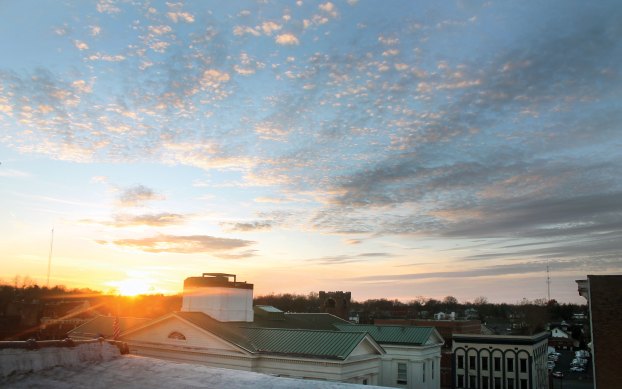 Completion of the Clark County Courthouse bell tower has been pushed back until late August.

Wednesday, the Clark County Fiscal Court voted to extend the project completion date until Aug. 24, because of delays at the manufacturing facility.

The tower was removed in November after it deteriorated and was causing significant leaks inside the courthouse.

According to a memo from Structural Systems Repair Group, Campbellsville Manufacturing, which is building the new tower, requested the additional time because of the amount of detail from the tower which was included in the photos.

The company told SSRG it could not complete or deliver the new tower until Aug. 13.

SSRG said it expects to have the components for the tower base complete by June 1, which would leave the remaining costs of installing the new tower, connecting the electricity and hooking up the new clocks.

“It’s a matter of getting the work done,” Magistrate Robert Blanton said. “We’ll have as many bills paid in this fiscal year as possible.”

The extension was approved unanimously.

Earlier in the meeting, state Sen. Ralph Alvarado gave a brief legislative update to the court.

“It was a very contentious session to say the least,” Alvarado said. “For a while, it looked like nothing was going to happen” on the budget or pension fronts.

“We wound up getting a (pension) bill that I think was good,” he said. “That opened the way for Senate Bill 366” which added some taxes on services.

Alvarado touted other achievements from the session including increasing state SEEK funding for schools, a phase-in for mandatory increase for city and county retirements, a bill to increase the age for juvenile marriage and one to put a constitutional amendment for crime victims’ right on the ballot in November.

“Despite the toxic environment in Frankfort this year, I think we got a lot done,” he said.

Clark County Road Supervisor Kevin Wilson told the court repairs to Ruckerville Road are estimated to cost about $112,500 to correct a slide.

The road has been narrowed to one lane but remains open.

Wilson said he would seek state emergency funding for the repair which will include installing steel to secure the road.

“We’ll try to come up with the money to pay for it,” Wilson said.

Because the project was declared an emergency, the county does not have to go through the bid process.

In other action Wednesday, the court:

— approved the second reading of a joint city-county ordinance to amend hours at parks.

— voted 5-1 to approve a contract with a company to collect net profit taxes for the county. Magistrate Pam Blackburn voted no.

— approved a request from Clark County Fire Chief Ernie Barnes for the Bluegrass Area Development District to conduct a fire study for the county at a maximum cost of $5,000.

A lack of staff at the Clark County Animal Shelter forced its director to end walk-in adoptions Thursday, a day... read more