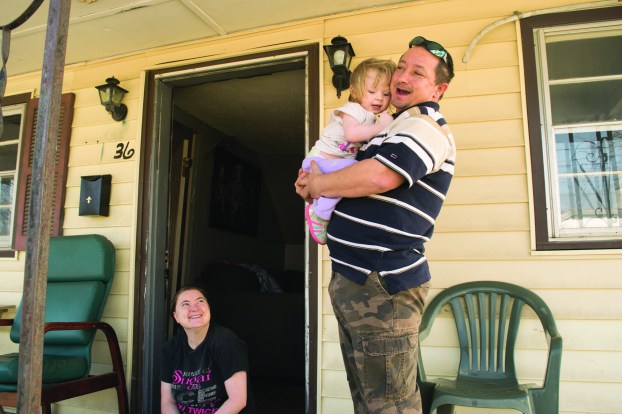 Jessica Fraley, 31, smiles as her husband Matthew Eversole, 38, picks up their daughter Gracie. The couple has lived on Lincoln Street for two years, and they say living there has been rough at times. (Photo by Kirsten Delamarter; Department for Local Government)

With redevelopment project on horizon, officials, residents talk about issues, plans for neighborhood

From the front porch of her Lincoln Street home, Jessica Fraley has seen just about everything. There have been arguments in the middle of the road and drivers flying down the one-way street in the wrong direction.

Though she doesn’t herself drink or use drugs, Fraley often sees unfamiliar people coming and going from nearby homes and knows it’s a common indicator of illicit activity.

There was also that time, she said, a neighbor threw a glass bottle into the yard, narrowly missing her young daughter.

But when she and her husband, Matthew Eversole, began renting their four-bedroom home in July 2016, they didn’t have much of a choice.

“We can’t afford nothing nicer,” said Eversole, 38, who is disabled and receives $400 a month in Supplemental Security Income. “I wish we could, but my rent here is $375 a month. And I’ve got a really good landlord.”

Lincoln Street is a narrow, one-block road near the train tracks, dotted with dilapidated homes and serviced by outdated water lines and storm sewers.

Lawns are often overgrown and tenants frequently move out as quickly as they move in.

For years, the City of Winchester has funded urban renewal projects to make local neighborhoods safer and more pleasant places for residents, and Lincoln Street is the most recent neighborhood to be eyed for redevelopment.

The project will revive a run-down area of Winchester, but it will also help fulfill what Mayor Ed Burtner calls a “serious need for decent, safe and sanitary housing in this community.”

The Winchester Housing Authority maintains more than 500 public housing apartment units, but if you’re a family looking to affordably rent a house, most of the options are pretty run-down, Housing Authority Executive Director Ed Stone said.

“Most of your rentals in Winchester — and I think most surrounding counties — have increased considerably,” Stone said, adding that a well-kept three-bedroom house might rent for $800 a month. “Somebody with limited income can’t pay that.”

As rent has increased, the Housing Authority has seen a rise in the number of applicants looking for affordable housing, and by Stone’s estimates, about 97 percent of the city’s affordable housing options are occupied.

That’s why city officials are teaming up with Habitat for Humanity of Madison and Clark Counties, as well as the local faith community, to increase the availability of safe affordable housing options.

“I think as a community, we recognize that none of us can do it by ourselves,” said Jennifer Gormley, fund development manager at the local Habitat for Humanity affiliate. “When we collaborate, we can celebrate having a really great finished project.”

In March, the Department for Local Government announced the City of Winchester had received $1 million in Community Development Block Grant funds for the Lincoln Street project. All told, the effort — which will include seven new single-family homes, as well as improved sidewalks, streets and other infrastructure — will cost just over $2 million.

In addition to the federal grant money, the city and Habitat for Humanity of Madison and Clark Counties will contribute $632,100 and $400,000, respectively.

Over the next two years, the city and its partners will overhaul the west side of Lincoln Street. The project is expected to be complete by December 2020. The city also hopes to secure funds to redevelop the east side of the street.

“These federal Community Development Block Grant dollars have a legacy of helping cities and counties better serve low-income families,” Department for Local Government Commissioner Sandra K. Dunahoo said. “I commend the city of Winchester and its community partners for recognizing the need for safe and affordable housing and for working together to improve the quality of life for low-earning residents.”

Nearly 500,000 Kentuckians live in substandard and unaffordable housing, said Russ Barclay, executive director of Habitat for Humanity of Madison and Clark Counties, who adds that the need is present in Clark County.

Habitat for Humanity’s goal is to build “quality homes that when families move into them, there’s no shame. There’s celebration,” Barclay said.

The organization enlists the help of volunteer builders — like a team of experienced workers from Christview Christian Church, which frequently partners with the local Habitat office — to build new, energy-efficient homes for individuals in need.

The homeowners can choose the vinyl siding, the roof color, the wall color, the cabinetry and the flooring.

In exchange, they help build the home, and the organization helps homeowners secure an affordable mortgage.

Though the redevelopment project is in its early stages, Burtner and Barclay both said this effort will help Lincoln Street become a vibrant and thriving community — one where neighbors socialize on front porches and children can safely play in front yards. It will be a place where families can be self-sufficient but also look out for one another.

Barclay said it’s too early to know whether the families currently living on Lincoln Street will qualify for relocation in the new Habitat for Humanity homes, but he said current residents will be given preference if they fulfill all requirements.

Fraley and Eversole have some mixed feelings about the effort. At first, Fraley said, she didn’t like living on Lincoln Street. But it grew on her. She got used to some of the issues and made friends with some of her neighbors. There’s room for improvement, she said, but moving could be difficult for her family.

“Places are hard to find, and when you move, you have to get to know your neighbors all over again,” she said.

Still, Eversole said he will be thankful for any assistance his family receive.

“I hope that they do something creative up here,” Eversole said of the plans for Lincoln Street. “They could put a playground there for all the kids, with some sand or stuff so they can’t get hurt.”

In the end, the couple envisions Lincoln Street much in the same way Burtner and Barclay do: a place with comfortable houses and a place where kids like their daughter can play.