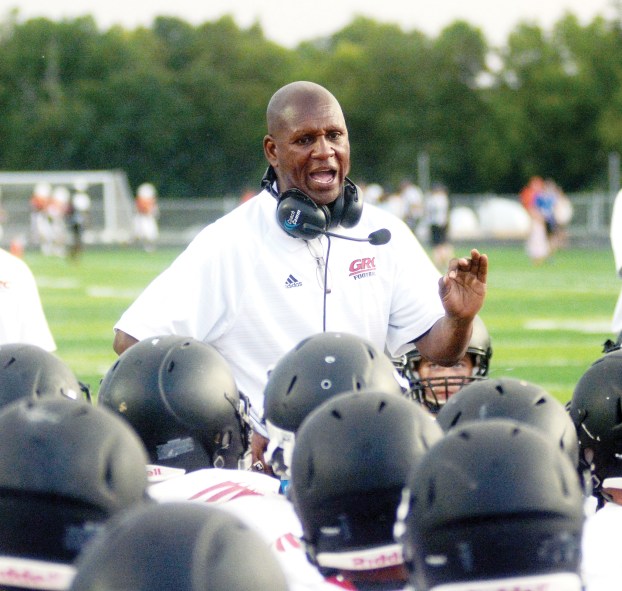 Head coach Oliver Lucas talks to his team during a game during the 2017 season. (photo by Casey Castle)

George Rogers Clark is hosting its second annual red and white spring game on Friday, May 4.

Oliver Lucas is in his second year at GRC and believes his team will have a comeback season to remember this year.

“We went 5-6, but that’s a step up considering what the record had been previously,” Lucas said. “After coach Columbia left they didn’t win for a while. That’s always been the challenge for me when I go in to places where there is a need for a little tweak here and there to get everything on its way back on track. That’s my gift in situations like that and turn programs around. I have always had programs changing and you have to know who you are.”

Lucas said that the football program is already taking steps in the right direction.

“Right now we have 125 kids in our program up from the total number when I first took it over when there was only about 27.” he said.

Before Lucas was given the head coaching job, he said he always had his eyes on the position at GRC.

“GRC has always been on my radar,” he said. “I used to be at Bryan Station for my first job when I first came to Kentucky. Then I went to duPont Manual in Louisville. From there, I was on my way back to Colorado and my friend told me the position was opening up and I told myself I had to take a look at that one. The committee did their research and did their homework and I got in and the rest is history.”

Lucas said he plans on doing the spring game differently this year in efforts to show the team’s true talent.

“It’s an opportunity to showcase a different side,” he said. “We’re doing it differently and we’re doing an NFL draft so it splits to the teams and gets kids in other positions that they don’t normally play. That way the coaches can get a feel for what positions kids can play as well as seeing how the team blends and shows how far along the kids have come because of spring practice. It’s exciting and it’s a fun time. After that, we’ll eat and the winners get to eat all the meat they want and the losers have to eat all the beans.”

Lucas said the players that he thinks will see success this season will be told just by watching the spring game.

“I think they will jump out at you just naturally,” he said. “Our quarterback is Will Henry and Nitavius Thomas started for us at running back. Then we have wide receiver Farris Shakadih back, Chase Taulbee as our tight end and then Ben Jackson who was our top offensive lineman so we average about 6’5” and 300 pounds on our offensive line. Defense is what really carries our team because we’ve got players that are really solid. Both of our defensive ends are 6’3” and 260 pounds. Our nose guard, Davonte Boyd, is 6’1” and around 315 pounds. Our linebackers are our spark plugs and they really get after you. Our secondary is really nice too. Jehdon Jenkins went first overall in the draft for the game.”

Lucas is quick to forget about last season and said that his GRC team this year has unlimited potential compared to previous years.

“We really have a chance right now to go undefeated if we just steady the ship and no injuries hit us,” he said. “We have a chance to put the program together for a whole year where last year I came in halfway through and had to go from there. This year we’ve got everything back that I needed as well as another year to lift weights and get stronger. That has really been a plus for us and the coaching staff is solid. I got my coaches back and that’s good. A couple coaches had to go because of family health and things like that, but for the most part my staff is in tact and I have a great staff. I’m really excited.”

Lucas said the spring workouts and practices have been going just as good as he imagined.

“Everything has been going well,” he said. “I have been so pleasantly pleased with the kids with their unbelievable work ethic. I’m just excited about that. Marcus Wiseman, another work ethic person in the secondary, that’s what makes this whole thing so positive and we’re ready to explode.”

Lucas is more than ready for his first full season as GRC’s football coach and wants to achieve nothing but greatness.

“Anything other than going undefeated would be a let down honestly,” he said. “We’re ready to do something great and significant for the town itself. The town is supportive of the kids and what we do. We’re together as a team and we’re ready to get things rolling. It’s on when it starts to get rolling.”

Lucas came in halfway through the 2017 season and does not feel like he made an impact as much as he wanted to.

“Last year I couldn’t put in the whole system for offense,” he said. “I had to pick and choose on what we’re going to do and live with it. This year, I’ve gotten my offensive coordinator back who I’ve had for nine or 10 years. He moved from Louisville and is coming back this way with me. That’s a bonus right there and another thing I don’t have to worry about. My defensive coordinator is back and I don’t have to worry about that either. All I have to do is manage and stay out of the way to not mess anything up. Our spring has gone the way it has all thanks to our coaching staff.”

Pre-sale tickets are $7 and include a dinner and it is $10 to enter the game at the gate. The red and white game will be played at Cardinal Field at 6 p.m.

GRC gives up early lead in loss to Bourbon