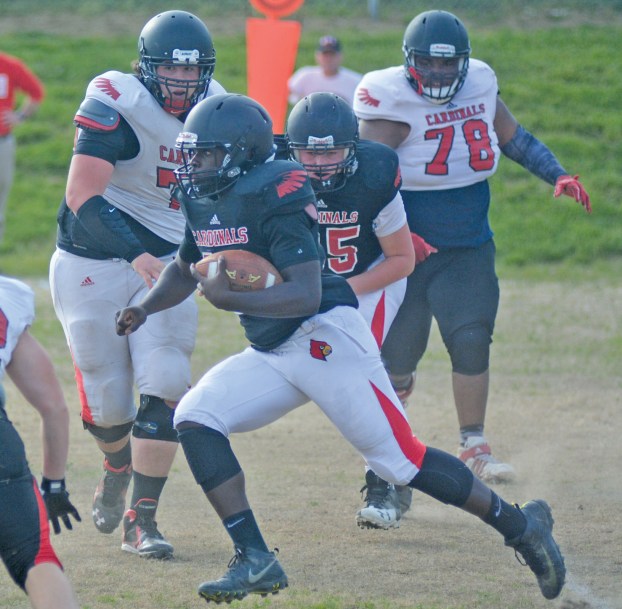 Due to the inclement weather approaching this weekend the game was rescheduled a day earlier.

The team held a draft to split the teams evenly as well as allowing players to play other positions to help the coaching staff get a preview of what they will be working with for the upcoming season.

Junior linebacker Jehdon Jenkins said he has been waiting a long time to get back on the field since the season ended.

“It felt really good to be back out there,” he said. “I have been waiting for a long time to come back out here with my team.”

Jenkins was apart of the red team and said that the other team had been trash talking and felt he needed to make a statement Thursday in the game.

“The game went pretty good tonight,” he said. “The white team was talking smack all week so we had to show them up. We’re all apart of this team together at the end of the day and we just have to put this work in during the summer.”

Jenkins said he likes the way his team is approaching this upcoming season compared to how they used to prepare for a new season.

“We been working really hard as a team,” he said. “We’re getting our lifts in, everybody is showing up and working hard. It’s just a process.”

Jenkins feels as though he could be the impact player on and off the field that his team needs.

“I don’t necessarily see myself as a leader, but if I have to step up to the plate I will,” he said. “Everybody needs to be on the same page for us to be successful and I’m willing to step up and make sure of that.”

Jenkins said he plans on giving it all he’s got in every game and practice this season and has high standards for his team next year.

Head coach Oliver Lucas was pleased with how the game turned out.

“Anytime you come away with no injuries or things of that nature is great,” he said. “That’s also because we’ve been lifting and we’re bigger, stronger and better. The kids know what they are doing and we divided the team up because of the draft. As a result, we had some sloppiness here and there but that is only because we had guys playing out of position. For the most part though it was well played.”

Lucas showed gratitude to everyone who helped make the event a success.

“It went really smooth and I appreciate the officials that came out,” he said. “I appreciate all the folks, family and parents that came and supported us. I hope that we put on a great product.”

Lucas said that he let his team have the spotlight on Thursday, but it is now time to finish the process.

“From here we are going to turn the equipment back in and get back in the weight room. We gotta get conditioned and get better. The next deadline for us is August 1 so we have to be ready to go by then.”

The red squad came out with the victory and defeated the white squad 28-0.

It has long been a tradition, even for this newspaper, to honor student-athletes who agree to play their sport of... read more