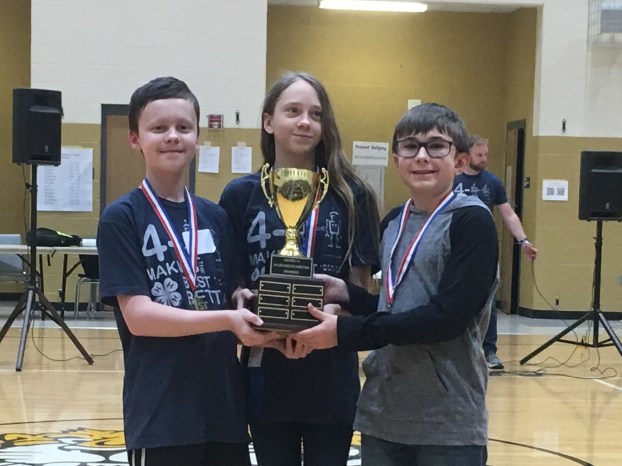 The first challenge is to “kick” five soccer balls into five soccer different goals on a six-feet by six -eet playing field. Next, while in a three-foot circle, try to push your competitor out of the ring in a non-destructive, friendly competition. Sound interesting?

Under the guidance of five 4-H adult volunteer robotics coaches, 4-H’ers were able to apply principles of programming concepts they learned over eight months to attempt to conquer these tasks.

Since September youth have met twice a month to learn how to build and program EV3 Lego robots to do a vast number of tasks starting by simply going forward, turning and to programming robots to use sensors to recognize changes such as color.

Youth have worked as teams throughout the year to program their “bots” step by step to perform tasks, testing, making educated adjustments and retesting multiple times through trial and error to get just the right program sequence so their bot could complete the designated task or challenge.

The playing field was made of wood and painted white with black lines.

Teams designed and programmed their robots in many different ways. No two robots looked or performed the same. Some robots used ramming devices and others had arms that flipped up to “kick” the ball.

Youth had to overcome many different variables while programming their bots to start, turn, move forward so many rotations, flip, turn, rotate again and while determining how much speed and “thrust” were needed in each motor to move the wheels. A lot of thought went into each adjustment made during the testing phase.

Some robots were successful during the competition and other robots traveled off course — all part of learning how to program robots.

The next event was one of everyone’s favorite, the sumobot challenge. There was a beginner and advanced competition set up in a bracket elimination challenge. Bots came to the sumo ring in all different shapes and adorning many different accessories. However, robots could be build no bigger than 25 by 25 cm.

In this challenge, robots work their way around the ring trying to push each other off and out of the circular, wooden sumo ring. Best two out of three wins the match. It is exciting to watch everyone cheer on their team’s robot.

Five rings were run at the same time during the competition making for an exciting afternoon.

The Clark County 4-H Robotics Teams had a good day.

The team of Naomi Schanding, Nathan Dittilo and Zachary Bratton won the overall advanced competition (soccer and sumobot combined scores) and were presented with a traveling trophy.

Cutting hay earlier is almost always better. That is, as long as you can cut it without it getting rained... read more