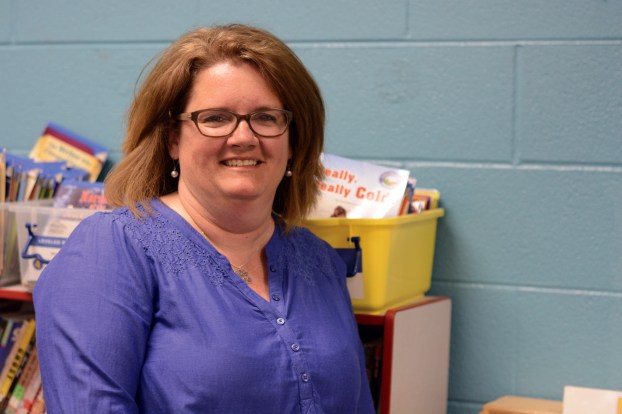 Stacie Carrington is a fourth-grade teacher at Strode Station Elementary School. She has been teaching the fourth grade for four years and has been in the classroom for 23 years.

Strode teacher strives to be caring, compassionate in the classroom

When Stacie Carrington started college at the University of Kentucky, she was majoring in business.

Initially, Carrington was uncertain about what she wanted to do or who she wanted to be, but she quickly realized business wasn’t for her.

So she changed her major to elementary education. She loved working with kids, and liked the idea of being in front of a classroom every day, so it seemed like a good fit.

Now, Carrington, a fourth-grade teacher at Strode Station Elementary School, has spent 23 years total in the classroom. This will be her fourth year teaching fourth grade.

“It was a big deal because I had never taught fourth,” she said. “Now, I love it.”

She spent the bulk of her years teaching third grade at the former Hannah McClure Elementary School. She was an instructional assistant for the first four years of her career and taught first grade for three years after that. She is also on the district talented and gifted committee.

Because the fourth grade is considered self-contained, Carrington teaches every subject throughout the day.

“We’re pretty busy all day every day,” she said. “We don’t have much time for a break.”

Carrington said she tries to split her teaching between traditional — quiet, classroom instruction — and active learning — hands-on, group-based and peer work. She said teaching in this style is essential because each student may learn differently.

“It balances out,” she said.

Carrington has three sons — ages 21, 19 and 13 — and spends most of her time outside of work with them or her husband.

Her boys played soccer, so she said she was always involved in their sports teams in some way.

She graduated from UK with a bachelor’s in elementary education in 1994 and earned her master’s degree from Eastern Kentucky University.

Carrington grew up in Winchester, spending her school years in schools that no longer operate or have the same name: Belmont, Becknerville and Victory Heights.

She said her parents were influential in her life. Her father was always driven, she said. He was a former 4-H county extension agent, He was also a sports enthusiast and pushed Carrington and her brother to do their best.

In fact, her father encouraged them to take up public speaking as elementary students, and those skills have carried with her throughout her life.

Carrington said she loves seeing how much her students grow from the start of the year to finish.

“When we talk about things we’ve done and just being able to compare them from the first of the year to this year, how much they’ve grown, you just kind of feel like you’ve accomplished something,” she said.

She said her students grow not only academically but as people.

“We tell them there’s more to life than making straight A’s, to be well-rounded and just being able to see them grow up from day one until the end to see how much they have matured and grown in so many areas,” she said.

Her favorite subject to teach is math, she said, and she enjoys teaching different methods and strategies to get to the same end.

There’s not enough time in the day ever, Carrington said, to do what needs to be done. There are many projects and additional enrichment activities that fall by the wayside because of time restraints, she said.

It’s also challenging to give individual attention to her classroom of almost 30 students.

Carrington said she is excited to implement a new program called Project Place, which will incorporate more culturally-diverse teaching and activities into the classroom.

Carrington said she strives to be an excellent educator as well as a role model for her students.

Over the years, traditional family dynamics have shifted. Carrington said these shifts have heavily influenced her students because expectations may be different at home and children may not have all their needs met, so teachers have to step in.

Carrington said although it’s difficult to see her students struggle, it’s even more rewarding to watch them succeed.

“Seeing that smile on their face when they have that pride in what they’re able to do now in their accomplishments,” she said. “I think that’s what makes it worthwhile.”

Having a supportive staff has been extremely helpful, she said. Carrington said she is thankful for the staff at Strode and especially her core team of fellow fourth-grade teachers.

“It’s so important, working with a team of people you know you can share things with, and they’ve got your back, and you can have their back,” she said.

Carrington said she hopes her students will always remember to work hard and give their best effort no matter what.

“And to always be kind to anyone you are interacting with because you never know what that person is dealing with away from school or away from home and just to be a good person,” she said.

The same goes for aspiring teachers, she said.

“Be willing to dedicate a lot of time to the job,” she said.

She said she also encourages new teachers not let negativity or a lousy day wear you down because there’s always room to grow, and even after 23 years, even Carrington learns something new every day.

Carrington said she also teaches her kids to make good impressions and to be the kind of person you want others to see you as.

“What do you want to be remembered by,” she said.

Carrington said she hopes people remember her as caring, compassionate and also as an educator that pushes her students to do their best.

“(I) want them to know that they have to work hard and they have to earn everything that they get,” she said. “Everything’s not given to them and that I’m not just going to give you the grade. You’re going to work for it.”

Carrington plans to stay in Winchester until she retires. After retirement, she hopes to live like her parents: on the road, seeing the world as well as watching who her sons and her former students go on to be.

Six months ago, Chad Burkhart traveled to Amelia Island, Florida, to raise money for diabetes research and to challenge himself... read more