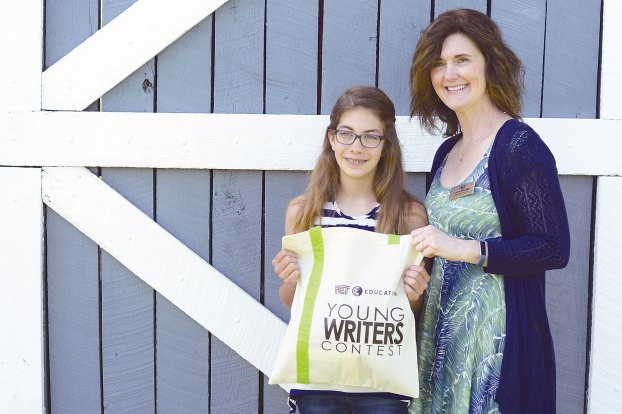 Annabelle Rossi, left, accepts a gift recognizing her first-place award in the fifth-grade division of the KET Young Writers Contest from Lynn Shaffer, education consultant of the Northeast region at KET. Rossi won for her short story “Tethered.”

The story is written from the perspective of a balloon, which starts off with its owner and then gets loose, flying off and seeing the world.

“The little girl that bought the balloon lets it go, and it just gets to see all of the world,” Annabelle said.

Annabelle wanted to write from a unique perspective, she said, having been inspired by Katherine Applegate’s “Wishtree,” which is told from the perspective of a tree.

Shannon Rossi, Annabelle’s mother, said this was the second contest Annabelle has entered and won.

Annabelle and Shannon first heard of the KET Young Writers Contest while sitting in the waiting room at Annabelle’s orthodontist office. An advertisement for the contest aired on TV.

Annabelle said her mom told her the news.

“I didn’t believe her at first,” she said.

Annabelle was shocked but excited to win and plans to enter more contests in the future, she said.

Lynn Shaffer, education consultant of the northeast region at KET, said there were about 1,200 total entries this year and more than 200 in Annabelle’s division.

The stories had to be a minimum of 400 words and a maximum of 800 and must be original work.

“It seems as if every year we get more and more entries, which is exciting,” Shaffer said.

Different divisions include an illustrated short story contest for kindergarten through third-grade, a short story for fourth- and fifth-grade and poetry for sixth- through eighth-grade.

Most entries are from students in Kentucky, but sometimes, students from out of state will submit a piece. This year, there were entries from 17 states.

One student sent an entry all the way from a military base in Singapore.

The contest opened in January and ended March 31. KET will feature the writings of this year’s winners on its website in June.

As a first place winner, Annabelle will receive a certificate to recognize the honor, a KET-commemorative tote bag and a $50 gift certificate to Barnes and Noble.

George Rogers Clark High School is one of 37 high schools in Kentucky to receive the College Success Award. The... read more