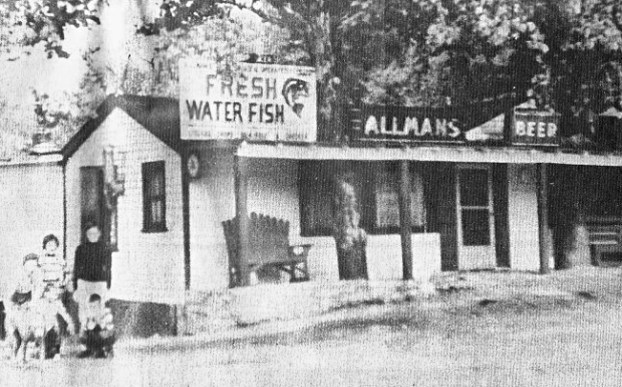 Hall’s on the River has been a landmark for more than four decades. The first restaurant here was run by legendary riverman, Johnny Allman. (Photo submitted)

Where in the World? Exploring the Kentucky River in Clark County

This old abandoned rock quarry on the Clark County side was operated in the 1930s and ‘40s by J.A. Fries & Co. of Knoxville, Tennessee, Caldwell Stone Co. of Danville, and finally by the Allen-Codell Co. of Clark County.

This was an African-American community located on the hilltop before you get to Hall’s Restaurant. Lisletown named for Fielding Lisle, a former slave, who purchased an unimproved tract of land on the plateau above in 1874.

During the Civil War, Lisle and his brother John enlisted in the Union Army. Their regiment, the 114th U.S. Colored Infantry, served at the siege of Petersburg, Virginia, and in the Appomattox Campaign that ended the war. This black community survived until the last residents moved away in the 1960s.

The creek was named for John Howard, who built a cabin on this stream in 1775 that entitled him to a land claim of 1,000 acres. With its potential for water power, this watershed would become one of Kentucky’s earliest industrial centers. The valley was the site of 15 mills, four distilleries, two quarries, a woolen factory, stone shop and blacksmith shop. Seven mills, three distilleries and a blacksmith shop were operating before 1800.

This 425-acre sanctuary features rare and endangered plants and historical-archaeological sites along a scenic limestone gorge. Mammalian species living in or passing through the Preserve include river otter, beaver, deer, coyote, wildcat, black bear, gray bat and evening bat. There are more than 400 species of plants. The historic Salt Spring Trace passes through the Preserve. The John Holder Trail, a public hiking area, may be accessed from Hall’s Restaurant parking lot.

Hall’s on the River has been a landmark for more than four decades. The first restaurant here was run by legendary riverman Johnny Allman. He opened the Driftwood Inn in the late 1930s where he served the first beer cheese and fried banana peppers on the river. Allman moved the restaurant to the present site of Hall’s in the early 1940s and a few years later sold it to Carl Johnson. Some years later, Allman came back and opened a new place, Fishermans Inn, which burned down in 1978. In 1965, Carl Johnson was shot to death in his restaurant, and the Hall family bought it shortly after.

Before the locks and dams were built, there was a rocky shoal here that allowed crossing the river at times of low flow.

The ford was named for the Shawnee chief Blackfish, who led more than 400 warriors to the siege of Fort Boonesborough in 1778. The war party camped near the present Winchester reservoir then traveled down Lower Howard’s Creek, crossing the river at the mouth. The Indians besieged the fort from Sept. 7-18 but finally withdrew without taking the fort and killing only two men.

This was one of the first marked trails in Kentucky (1775). Began at Fort Boonesborough, crossed the Kentucky River at Blackfish Ford, followed a buffalo trace up Lower Howard’s Creek about four miles then turned north and continued on to the Lower Blue Licks, where the first settlers went to make salt and hunt buffalo.

John Holder came to Boonesborough during the Revolutionary War. He served during the great siege in 1778 and later commanded the fort. In 1782, he established his own pioneer fort, Holder’s Station, on the bluff above. He married Fannie Callaway, one of the kidnapped daughters of Col. Richard Callaway. Holder was a business entrepreneur whose enterprises at the mouth of the creek (downstream side) included an inspection warehouse, boatyard, ferry and tavern. A short distance up the creek he ran a mill. These enterprises formed the beginning of Kentucky’s earliest industrial center.

This partially sunken wreck near the Clark County shore was a sternwheeler towboat known as the Brooklyn, originally built at Jeffersonville, Indiana, in 1930 as the Helen H. This diesel-powered boat worked under various names on the Mississippi, Ohio and Cumberland rivers. In 1960, Capt. John Donaldson of Nicholasville purchased the boat and renamed her the Brooklyn. He later sold it to Linville Puckett who used her for a marina and beer depot near Boonesborough. The boat sank in 1977. An effort to refloat the vessel in 1986 failed.

Samuel R. Combs took over the ferry and warehouse at Holder’s Landing after his father-in-law John Holder died in 1799. In 1833, Combs was murdered on the steps of the Clark County courthouse by James and Lamentation Bush. In 1858, James T. Woodward and Daniel Bentley moved Combs Ferry about three-quarters of a mile downstream to near the end of present day Amster Grove Road. The old turnpike highway from Paris to Richmond crossed the river at this ferry.

In about 1861, Henry Calmes Jr. and Lewis Adams erected a steam-powered gristmill and sawmill. Three years later John W. Martin purchased the mill and ran it until at least 1880. The mill was part of a small community around the ferry, which also included a store, schoolhouse and several residences.

This creek was named for Matthew Jouett who made an improvement here in 1775 and then died during the Revolutionary War. His brother and heir, Jack Jouett, claimed the land and sued John Holder who held an overlapping claim. The suit dragged on for 37 years before being finally decided in favor of Holder’s heirs. Jack Jouett achieved fame during the Revolution for his midnight ride to warn Thomas Jefferson and the legislature that the British were coming. His son was the noted painter Matthew Harris Jouett.

This warehouse for the inspection of flour, tobacco and hemp was established in 1808 by an act of the General Assembly. Located about a half mile downstream from Jouett Creek, the warehouse stood on the land of Henry Hieronymus, who also operated a ferry here. Warehouses were established by the Kentucky General Assembly in order to inspect goods destined for shipment by flatboat downriver to markets in New Orleans.

Berkley Spring Branch is the last stream on the Clark County side of the river before Boone Creek. Daniel Berkley owned a large farm overlooking the river. His spring branch, though less than a mile long, forms a beautiful gorge with picturesque waterfalls where it cuts through the palisades before emptying into the river.

This early factory made lead shot by dropping molten metal through a sieve at the top of the cliff. As it fell, the molten lead formed round balls whose diameter varied with the size of the sieve openings. Shot was collected and cooled in a vat of water at the bottom of the cliff. John Stuart, visiting in 1806, wrote “We also went up to view the old shot manufactory built on the edge of precipice 2 or 300 feet high.”

Boone Creek was named for the legendary explorer, Daniel Boone. Its lower reaches form the boundary between Fayette County and Clark County. The last few miles of the creek are noted for spectacular scenery with towering cliffs on both sides. Boone Creek spawned a number of water-powered manufacturing enterprises beginning in the 1790s. The entire scenic and historic watershed is listed on the National Register of Historic Places.