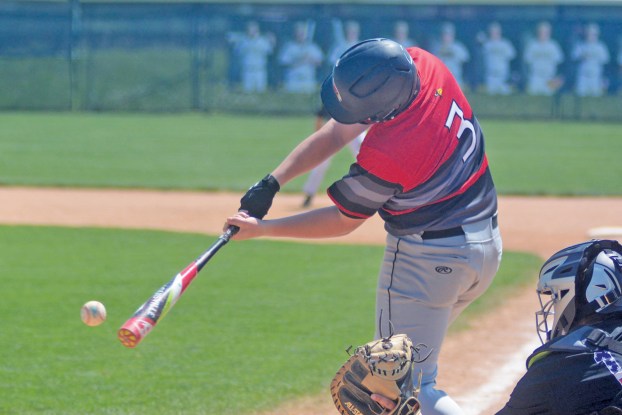 Aaron Abner hits the ball down the third base line in GRC's 6-3 loss to Boyle County on Saturday. (photo by Micah Satterly)

GRC baseball goes 0-3 after tough weekend on the road

Many miles were traveled as the George Rogers Clark Cardinals had a full weekend of baseball.

The Cards then headed to Boyle County on Saturday to face Boyle and regional opponent Campbell County.

GRC unfortunately could not return to Winchester a win under its belt as the Cards finished 0-3 for the weekend.

The Cards first played Boyle County on Saturday Morning who is a top five team in the state.

They led 1-0 through five innings and gave up six runs total in the fifth and six innings to the Rebels and lost the game 6-3.

Caden Easterling was on the mound for Clark County and pitched through six innings and allowed 11 hits and finished with four strikeouts.

Bo Billings put up the first run of the game to give the Cards a 1-0 lead in the third inning due to a home run.

Billings led GRC with two hits at two at bats.

The Cards had control against Campbell County the whole game until Campbell came alive in the seventh inning and came out victorious in a 4-3 win.

The game was even at three runs a piece with the bases loaded until a Campbell player was hit by a pitch to drive in a run for the lead.

Billings was on the mound for GRC and surrendered two runs on four hits.

He finished six innings and had seven strikeouts.

Jake Ware led the Cardinals in hitting as he went 2-3 for the plate.

“We went to Scott County on Friday night and had a rough one,” he said. “The biggest thing is we had a couple injuries. That is what concerns me more than anything at this time of year and just injuries period. Going into the post season, you want everybody healthy. We had to sit Dakota Puckett and Cameron Dove today and let them get rest. No reason to bring them out and get them hurt any worse. It’s just not worth it in the bigger picture.”

Overall, Puckett was proud of the competitiveness of his team.

“I thought we competed well today,” he said. “We faced two good teams. Our defense broke down a little bit, but that’s just part of it. We were younger in the positions so you can’t fault kids for effort and when they are giving you effort that’s all you can ask.”

Puckett said that Campbell brought out the strongest pitcher they had to make a statement, but Puckett admits that they were not willing to do the same yet.

“They came in and brought their ace,” he said. “We probably could have done the same, but to be honest with you we didn’t want to show him. We started with Bo and he threw a great game. We thought some soft stuff would break them back. Tyler Walton came in and dead a great job but we shut down a little bit defensively and it happens. It’s just like bowling pins falling one after another. Sometimes you have to find someone to step up and Tyler did. Bases were loaded and it could have been worse but he got us out of that inning so I was proud of the way he played.”

The regular season is going by quick which means the post season is right around the corner.

Despite the fall backs this past weekend, Puckett still says his team is in good position to be where they want to be.

“I definitely believe our hitting is where it needs to be,” he said. “We’re definitely hitting the baseball. Once we get our starters back, defensively we’re going to work on a lot of ground balls. That’s what it is going to take. I like where we’re sitting and we’re the one seed. We play Paris first game and you don’t want to overlook anybody. You have to beat the first team to advance and we’re going to dive head first against Paris and try to advance to the regional tournament.

Puckett said that rest will be crucial to his team as they took a low blow this weekend.

“We’re going to rest and it’s been a long haul,” he said. “We’ve practiced more this year because we’ve had a lot of rain. We’ve been hitting a bunch and that’s one of the reasons why I think our hitting is how it is because it carried over. Tomorrow we’re going to take off for Mother’s Day and spend time with their mothers if they are still fortunate enough to have them around. Their moms will be there for them no matter what so that’s what we will worry about first before progressing any further.”

GRC will play again Tuesday, May 15 at Montgomery County.

They will return to play at home again on Thursday, May 17 and will face Sayre.

The Garrard County Golden Lions were too much for the Cardinals to handle as they were defeated 12-2 GRC lasted... read more