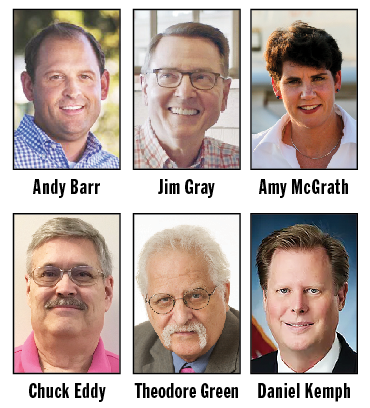 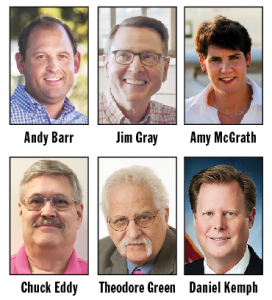 Editor’s Note: Also on the ballot for the Democratic party will be Geoff Young and Reggie Thomas. Questionnaire answers were not received from these candidates.

Civic involvement: Member of Good Shepherd Episcopal Church, served on the Board of Directors of the Friends of the Isaac Murphy Memorial Art Garden and Prevent Child Abuse Kentucky.

Civic involvement: Volunteering, especially when it comes to feeding the homeless

Education: Bachelor of arts degree in political science from Naval Academy and masters of art in international and global security from John Hopkins University

Political experience: Military fellow in the office of Congresswoman Susan Davis in 2011. Also taught U.S. governments to midshipmen at the U.S. Naval Academy for three  years.

Civic involvement: In the various duty stations I have been assigned, I’ve been involved in local communities and schools in such roles as soccer coach, therapy dog trainer and religious (Catholic) education instructor.

What will be your top priority if elected to office?

AB: Creating the conditions for private-sector jobs and economic growth. As the Representative of central and eastern Kentucky, it is critical I advocate for our signature industries such as bourbon distilling, thoroughbred horse racing, car manufacturing, and Kentucky coal and the thousands of Kentuckians they employ.

CE: Healthcare — Improving Obamacare. Keep basic health essentials including free birth control, preventing unwanted pregnancies and reducing abortions. Veterans care, because when they serve, they serve us and we owe them. Criminal justice reform — The U.S. has the highest percentage of population imprisoned in the world. Decriminalize marijuana.

JG: Kentuckians first. It’s time to put partisanship aside and do what’s right for Kentuckians. So in short, fix healthcare, invest in education and teachers, attack the opioid crisis, grow jobs and invest in infrastructure, legalize medical marijuana, protect our seniors and more. Read my full ‘To-Do’ list at JimGrayCongress.com/issues.

TG: Talking and listening to the people of the 6th District, ascertaining their concerns, needs and problems then taking them to Congress to write legislation. Housing is moribund. Women’s issues are nearly stagnant. Opioid epidemic is out of control. These issues and more must be addressed.

DK: My top priority will be working to make broadband Internet a public utility. 21st Century, information-age jobs are entirely dependent on the critical Internet tool being available for all people regardless of where they live.

AM: I’m committed to working in a bipartisan way to fix and expand the Affordable Care Act, which brought down Kentucky’s uninsured rate dramatically. We should add a Medicare buy-in option for those over 55 and a public option. I believe healthcare should be a right not a privilege.

What makes you the best candidate for the job?

AB: I ran for Congress for a cause — to save America from bankruptcy, restore the American Dream and keep the American people safe and secure. Now more than ever, it is critical for central and eastern Kentuckians to have a strong, proven, and accountable leader representing them in Congress.

CE: As a Moderate Republican I will reach across the aisle. Our country needs bipartisan solutions, not the exclusively partisan efforts like the ACA/Obamacare gutting AHCA that Andy Barr voted for or the way the ACA/Obamacare was passed.

JG: I’m the most qualified candidate because of my experience in business and public service along with a record of bringing people together to solve problems. In Lexington, we solved challenges by working together. Additionally, I won the district in 2016 over Rand Paul. I’ll do it again this fall.

TG: I’ve talked to people in all 50 states and especially in Kentucky. I dined under bridges with the homeless and in mansions. I strongly believe it’s this kind of experience that will set me ahead of the pack. I understand the people and their concerns, rich and poor alike.

DK: I am the best candidate because I am one of us. The things that worry me — retirement, healthcare, meaningful work — are things that everybody worries about.

I do not have a guaranteed pension or guaranteed lifetime healthcare like every other candidate.

AM: I believe in serving the people, not special interests and speaking the truth, not selling quick fixes. We need citizen-leaders who believe public office is a service. I’m the only candidate in this primary that has federal government and Congressional experience, and I’ve spent my entire life in the service of the country.

What professional/political accomplishments are you most proud of in your life?

AB: The two most consequential laws I have been most proud of passing in my time in Congress were the Tax Cuts and Jobs Act and the 21st Century Cures Act, the first puts real money back to Kentucky families. The second invests billions into lifesaving research and fighting the opioid epidemic.

CE: During my time in the soft drink business, I created a number of jobs by leading my sales departments to increased sales. Those positions meant families were put to work and supported.

JG: I’m proud of the way we solved Lexington’s healthcare and pension crises. We found innovative solutions and avoided a financial disaster. I’m also proud of the Kentucky jobs and the plants our company built like the Martek and AINAK facilities in Clark County.

TG: Serving in the United States Navy during the Viet Nam war. Becoming a part of the Peace Movement in the 1960s, working on campaigns for Democratic candidates over the years. My work as a nursing personnel coordinator at a world-famous cancer research center.

DK: As a young accounting apprentice, I helped restore a community bank. During that intensive process we were able to keep people in their homes that any other bank would have evicted. It was deeply satisfying work that inspired me to remain in the banking industry.

AM: I’m most proud of the title United States Marine, which I earned in 1997. I’ve flown 89 combat missions in the F/A-18, served my country in three combat tours and around the world. I’m also proud of my MA in global security, my time serving in the Pentagon and on Capitol Hill, as well as rising to the rank of Lt. Col.

What is the biggest challenge our community faces? How would you address it?

AB: Fighting and ending the opioid epidemic is critical to a secure future for Kentucky. I created the Sixth District Drug Abuse Task Force to make recommendations to change policy and produce action, and also introduced and passed an amendment to increase funding to $280 million for the High Intensity Drug Trafficking Area Program.

CE: The huge healthcare expense without commensurate improved care. Our costs of $9,000 per capita are three times other OECD countries. Our life expectancy is dropping below other developed countries who all have universal healthcare. We need to move towards that, starting with improving the ACA/Obamacare, not gutting it.

JG: Our biggest challenges are hyper-partisanship and the influence of money and special-interests in politics. Washington Republicans spent the last year voting to rip healthcare away from Kentuckians. It was purely partisan, intended to make their corporate donors happy. I’ll defend and fix healthcare so it’s universally available and more affordable.

TG: Homelessness. This is an expensive problem with many challenges. I would start with two studies; the first one, how many people in Lexington need housing; secondly, what would it cost. Then go to Congress with the information for the required funding.

DK: The dignity of meaningful work in a robust, growing economy is the challenge that many Kentucky communities face.

Broadband as a public utility is a critical step to facing that challenge as well as an Infrastructure bill that includes job training to fully utilize the Internet tool in a 21st Century America.

AM: Much of central Kentucky’s economy has been left behind in the 21st Century and ignored by our current representatives. We need to invest in the new economy, promote the manufacturing economy, revive the resource economy, while preserving our communities and way of live. Check out my Economic Development Plan on amymcgrathforcongress.com for more information.

AB: ISIS has lost over 95 percent of the territory they held previously, North Korea has finally come to the negotiating table, and we are moving our embassy in Israel to Jerusalem. We are rebuilding our military, have just passed the largest pay raise for our troops in a decade.

JG: We’re seeing every day just how important it is to send people to Washington with experience, a record of innovative problem solving and delivering results. I devoted my life to improving Central Kentucky. And I’m proud of the work we’ve done for Kentuckians. That’s who I’ll continue to represent.

TG: I can’t say that I’ve ever wanted to run for public office. However, in recent years I’ve watched America get beaten down by career politicians, bad policies and decisions. I can no longer sit by and merely make phone calls or hand out pamphlets. Its time for me to act.

DK: I want to earn your trust and your vote to fight for economic equality and healthcare equality. Ours is a time where American lives are determined by how they began. We need a system that allows everybody an equal opportunity to succeed.

AM: I grew up in Kentucky and left at 18 to serve in my country’s military. Every holiday when I wasn’t deployed, I cam home. I’m as Kentuckian as any of my opponents. I even played in the first Kentucky State Girls High School Soccer Championship game in 1992, and was inducted into the Kentucky Aviation Hall of Fame.