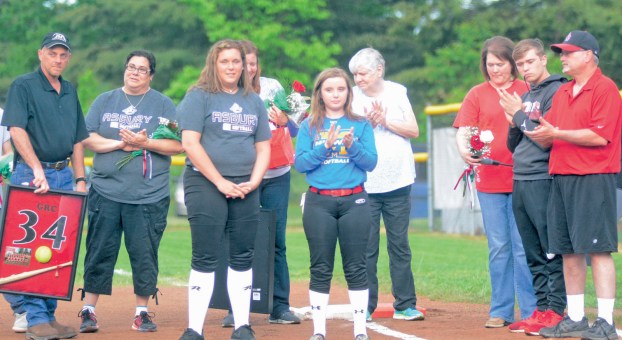 Whitney Walker and Claire Brandenburg were recognized on senior night against Lee County before the game got called off due to weather. (photo by Micah Satterly)

GRC makes the most of senior night despite weather

Through the rain, GRC took advantage of the remaining time left with the two senior softball players Whitney Walker and Claire Brandenburg as they were recognized on senior night Friday.

The game was scheduled to start at 7 p.m. and after a 45 minute lightning and rain delay, the game against Lee County was called off.

However, both teams made use of their time by having a dance off to “The Cupid Shuffle” while waiting to see if the weather would blew over.

The weather failed to do so, and Walker said she was saddened.

Brandenburg said she was disappointed at the weather.

“This is one of the biggest moments of our lives,” she said. “I was really wanting to play.”

Now with only two remaining regular season games before district, the seniors hope that this cancellation has not sent the team’s progress backward.

“It’s a very big thing that we play as much as we can,” Walker said. “These games are like competitive practice and are better for us than practice so we can be more prepared going into the post season.

Walker said she does not know how to put in words how great of an experience it has been playing on the team.

“It’s been beyond great,” she said. “I don’t even know how to describe it.”

Brandenburg said that the team has came a long way since the beginning.

“I’m extremely proud of this team,” she said. “We’ve came together and got through a lot this year. It has been awesome.”

Brandenburg will be headed to Midway University and Walker will be attending Asbury University where they both will resume their softball careers.

If the weather permits, GRC will host Anderson County at 12 p.m. and Franklin County at 4 p.m. The Cardinals will enter the district tournament on Monday in which they will face Paris at Montgomery County at 7:45 p.m.

Senior night for GRC baseball ended in a 9-6 victory of Sayre. The Cardinals bounced back from a weekend full... read more