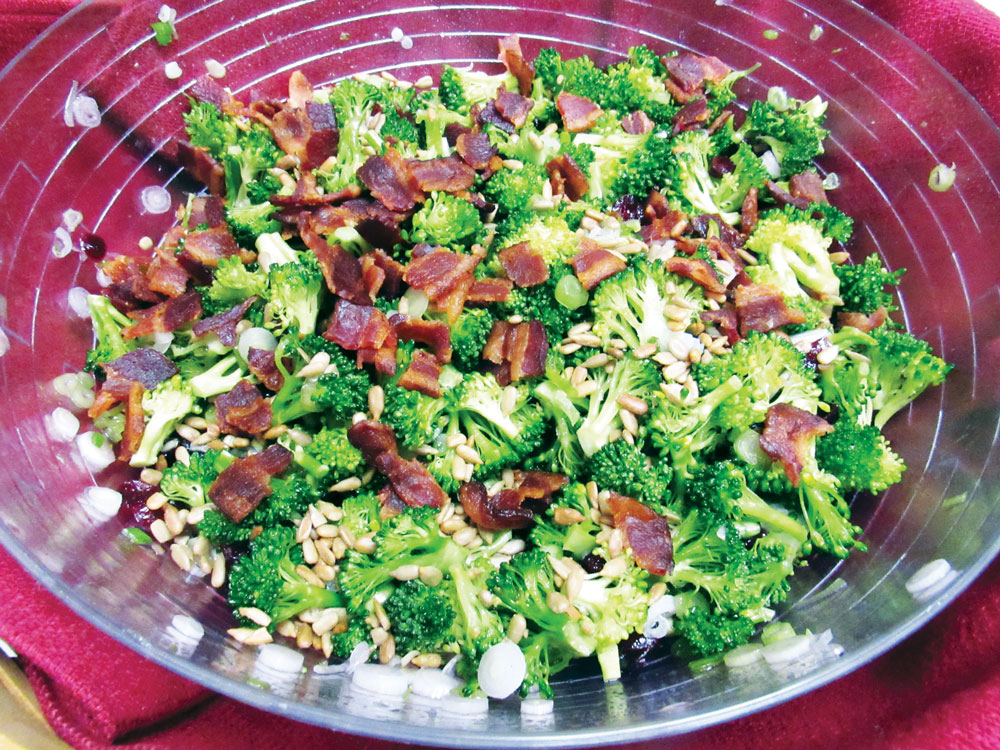 In a large bowl, combine broccoli, green onions and cranberries. In a small bowl, whisk oil, vinegar and sugar until blended; drizzle over broccoli mixture and toss to coat. Refrigerate until serving. Sprinkle with sunflower kernels and bacon before serving. Yield 10 servings.

Our church was having two potluck meals in one day — one was during a Vacation Bible School preparation meeting after the morning worship service and the other was a church-wide fellowship following business meeting that evening.

I was trying to decide what I would take when I stumbled upon today’s recipe at tasteofhome.com.

Potlucks always need vegetables, and this salad sounded good to me because it didn’t involve mayonnaise or some other condiment as the dressing.

Since this recipe said it feeds 10, I decided to double the recipe to accommodate the larger crowd.

When Saturday came I headed to the store pretty early to beat the crowd.

First stop was the produce section. I put some broccoli in a bag and looked for a scale to weigh it. It was about 1.5 pounds and I had three heads of broccoli. I decided I better get more because I only needed the floret part for the recipe. I thought, surely three pounds would yield the two pounds I needed and I bought one more head so we could have it steamed in a couple of days.

After grabbing two bunches of green onion, I looked for the rice vinegar. There were several to choose from, and after staring at the bottles trying to decide, I ended up getting the “natural rice vinegar.”

Dried cranberries were easy to find. When I found the sunflower seeds, of course I wanted the kind that were already shelled, I only had one choice unless I wanted dry roasted, and I didn’t. I finished my shopping and headed home.

After getting all the groceries in the house and putting things away, I started washing the broccoli and onions. At that point, I decided to get all of the ingredients for the salad ready and put it together the next morning before we left for church. I was afraid if I mixed it together and it sat in the refrigerator overnight, the onion might overpower everything and it might get limp or mushy with the liquid ingredients poured over top.

I cut the florets off the broccoli and measured eight cups. It became apparent I didn’t have enough broccoli to double the recipe, so I pulled my extra head out of the refrigerator, rinsed it and cut it up too. I ended up with about 12 cups of broccoli florets.

Since I was not going to go back to town for a little bit of broccoli, I decided I would just be making 1.5 times the recipe.

When I all of the broccoli was cut,  I put it in a large zipper-sealed bag and started chopping the green onions.

I always have the same mental debated when I use green onions.  Do you use all of the green stems or not? I decided to use part of them and just cut a little off the top from each onion. I used 1.5 bunches. Those little things were pretty strong and my eyes were watering by the time I finished. I scooped them up and put them in a plastic container and sealed it with its lid.

Then I grabbed a tissue to wipe my eyes.

Now it was time to bake the bacon. Of course I baked the entire package. And because everyone, well almost everyone, loves bacon, I crumbled up eight crisp slices into a bag.

I gave everything the once over, placed it in the refrigerator and knew it would only take a few minutes the next morning to put together. The dressing would be a cinch to mix and pour over the salad right before we left for church.

Now I was ready to bake a batch of cookies for the VBS luncheon dessert.

When Sunday morning rolled around, I put the vegetables and dried cranberries in a bowl and tossed them together. Then I poured the canola oil into a measuring cup, opened the rice vinegar and when I read the recipe to see how much to use it said “seasoned” rice vinegar. Remember, I debated while at the store and ended up buying “natural.” It was too late to do anything, so after looking in my spice drawer, I just added some salt and pepper to “season” it. I poured in some sugar and whisked the mixture. I poured the mixture over the salad, tossed it, put a lid on it and we were off to church.

Before putting the dish in the refrigerator at church I gave it a good shake.

Our friend Sandra was in charge of getting the meal on the buffet tables for the VBS luncheon and she asked Brad and me to help.

When it was time, I pulled the salad from the refrigerator and gave the bowl another shake. I took the lid off and then sprinkled the sunflower seeds and most of the bacon on top, I tossed the salad, then added the rest of the bacon for effect.

We had all of the dishes on the table and were waiting for everyone to arrive when I took a small bowl and put a tiny scoop of the broccoli salad in it and handed it to Brad.

I took one bite and after he had his few little bites, we both thought it was good. I was anxious to have more when we went through the buffet line.

By the time we made it through the line, there was no salad left. Just a smidgen clung to the side of the bowl. I took the spoon, turned the bowl on its side and tried to scrape out what little was left (there was no broccoli stuck to the side of the bowl). I was so sad the whole salad was gone, and I was so glad we’d taken a little taste beforehand.

I didn’t know who all in the large crowd had eaten the salad, so I wasn’t able to get anyone’s opinion. On our way home from church, Brad said he liked the salad, but he didn’t think the sunflower seeds added anything. I thought they added a little crunch.

Mother’s Day was the next weekend and I decided I’d make it again since I was cooking supper for my mom that night.

I put the salad together just like I did the first time, but just made the one recipe.

The verdict while we were eating was “Yum, this is good.” My son, Daniel, really liked it. My mom said it was okay but she thought it needed a little more dressing and a little more seasoning. Brad and I liked it. It was so good, in fact, six of us ate almost the entire salad. What little bit was left was eaten on Monday with our supper.

This recipe is definitely a keeper (you guessed it: I nailed it), and I’ve already decided it will be what I take to my family reunion in July.