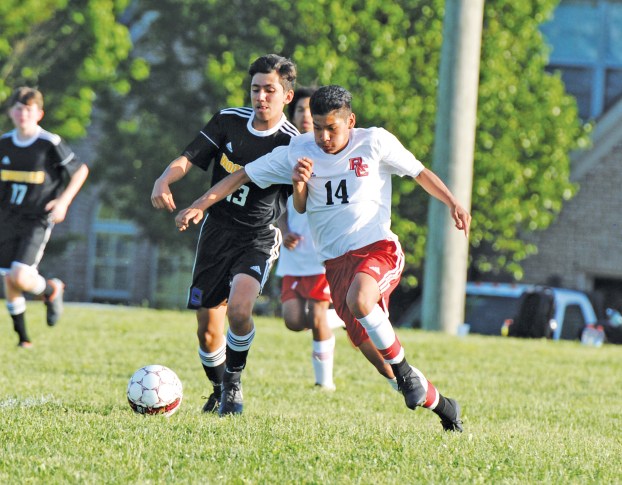 Brandon Beltran holds a defender off in the tournament game against Woodford County on May 10. (photo by Micah Satterly)

In his first season at Robert D. Campbell, Renny Ross was not sure what to expect as head coach of boys soccer.

However, he is certain about how helped change the culture in a positive way for RDC soccer for years to come.

Bouncing back from a 4-6 season to a 7-3 season this year, Ross is confident the “philosophy” that he brought along with him made an impact on the team.

“The kids really brought into the philosophy that we tried to bring in this year,” he said. “They ended up believing in a system and in what they were doing which was 90 percent of it. These kids were the ones that were really out there playing.”

Ross said his oldest son had played on the team the last two years before he became head coach.

He has experience in being around the team and he said he could see the changes in the team even at the beginning of the season.

“There was just no discipline to play as a team or respond,” he said. “We do everything as a team together. We tried to bring in a lot of the team aspect. Everything we do was for the good of the person standing next to them.”

He admits that he set too high of standards when he had no idea what to expect.

“I realize that coming in the first year that my expectations at times were a little bit too much and too soon,” Ross said. “We don’t have high goals for the program, but I was maybe trying to get them too far too quick. It takes time to implement a new philosophy. I sometimes expected players to understand and know so I have to adjust how I prepare. It was very tactical at the beginning. “

Besides playing as a team and playing together, Ross said there is still physical skills that could use improvements next year.

“I think we need to improve defensively and our speed as well,” he said. “The greatest thing about it is that I had 11 seventh graders and four sixth graders on the team which is a very good nucleus to go into the year with.”

Despite the system and philosophy that was implemented on the team this year, Ross confessed that one of the main goals for the season was not achieved.

“The number one goal we had was to win the conference,” he said. “Both regular season and the tournament. We didn’t do either so the ultimate goal has not been met yet. We did exceed a lot of people’s expectations.”

The team achieved goals on the field this season, but Ross said he was most impressed on the dedication of his team to their schoolwork.

“We had players eligible throughout the season because they are students first,” he said. “I got an amazing report from the teachers and admins about how our players responded on and off the field. Those things to me are more important than how we do on the field.”

It is publicly known that the team suffered a blow when their friend and teammate Hunter Cooper was unable to play due to illness.

Ross said it is no question that it unified the team.

“I think that situation helped without a doubt,” he said. “We learned how to play for someone else rather than the individual thought process. We taught them how to take a difficult situation and turn it into a positive. Him being able to come to the games and support us gave us an extremely large amount of confidence.”

Ross said the community’s support helped the team to stay motivated and enjoyed the gestures they got all season.

“The support for these that I have received from parents in our community was an amazing thing,” he said. “It blew me away and I did not expect to see the excitement for soccer on a middle school level. The overwhelming support this season has been great.”

GRC makes the most of senior night despite weather

Through the rain, GRC took advantage of the remaining time left with the two senior softball players Whitney Walker and... read more