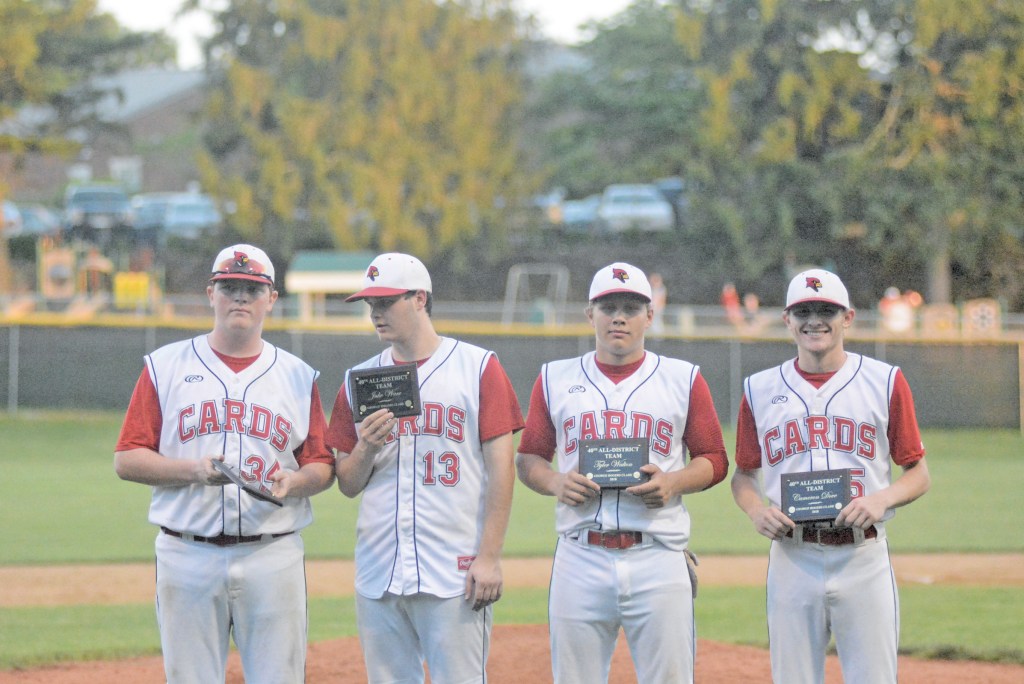 The Cardinals hosted district this year and lost a tough head-to-head game after sweeping the Indians in the regular season series.

The game was tied at four a piece with Montgomery batting at the top of the seventh when an error allowed the Indians to score a run for the lead to seal the game.

GRC posted seven hits to Montgomery’s four despite the loss.

The Cards captured an early 2-0 lead in the game and stretched it out to a 4-2 lead.

A two-run home run brought Montgomery back in to even the game at two.

Dakota Puckett smacked a double with the bases loaded to help widen the lead.

Montgomery quickly stormed back in the fourth inning and scored two runs to tie it at four.

Jake Ware was on the mound for GRC and pitched through six innings.

He had nine strikeouts and allowed four hits.

Ethan Huff threw almost two-thirds of an inning in relief.

Puckett went 2-for-4 at the plate to lead the Cardinals.

Head coach Matt Puckett was very disappointed in the turnout of the game.

“We had a couple of miscues defensively,” he said. “That’s big. Especially against a team like Montgomery county and this was the third time we have had to play them this year. I knew going in it was going to be tough. They’re a well-coached team and coach Varney does a great job with that bunch. When it comes down to it, we have to make the plays. We brought in Ethan Huff after Jake pitched a long game and he did a pretty good job. We just couldn’t make some plays and at the end of the day we realize we will be headed to region and there are teams in the state that wishes they were in our position. We’re looking forward to getting a chance in region.”

“I’m pretty disappointed obviously,” he said. “Not the way we wanted to finish our last game here. We hit the ball well, but we just had some defensive mistakes that cost us the game at the end. Jake threw the ball well. It was just the mental mistakes that played us.”

Puckett said that he is going to make his team make a decision on how they want to handle their loss.

“They can look at it two different ways,” he said. “You can look at and let it upset you or look at it and tell yourself that is the last time you will lose. Realistically, that is the last time we can lose. We have three straight that we have to win. I told them when I came in this year that the goal is to win region. Everyone wants to win district and yes it is nice, but the ultimate goal is to get yourself in the region. It’s all about the draw now.”

Neal said the team has no choice but cut the little mental mistakes out because those are what can cause the most problems in a big game.

Puckett said that he hopes his team gets the luck of the draw to hopefully help them in region.

“It’s all about who we draw and move forward,” he said. “We’re a two-seed so we’ll draw a one. So you can go into it hoping to get the best draw and keep going forward. At that point, it is one game at a time and a lot of steps have to come right. A lot of luck has to be involved too, the draw is very important. We have three straight ahead of us now, that was our last chance to get beat so we cannot get beat now.”

Neal said that the time they have to to prepare for region is in their favor.

“We are going to have a week to prepare,” he said. “We have to settle down and practice. We’re going to put it behind and worry about the next game.”

The 10th Region drawing will be on Saturday and the games will be announced.