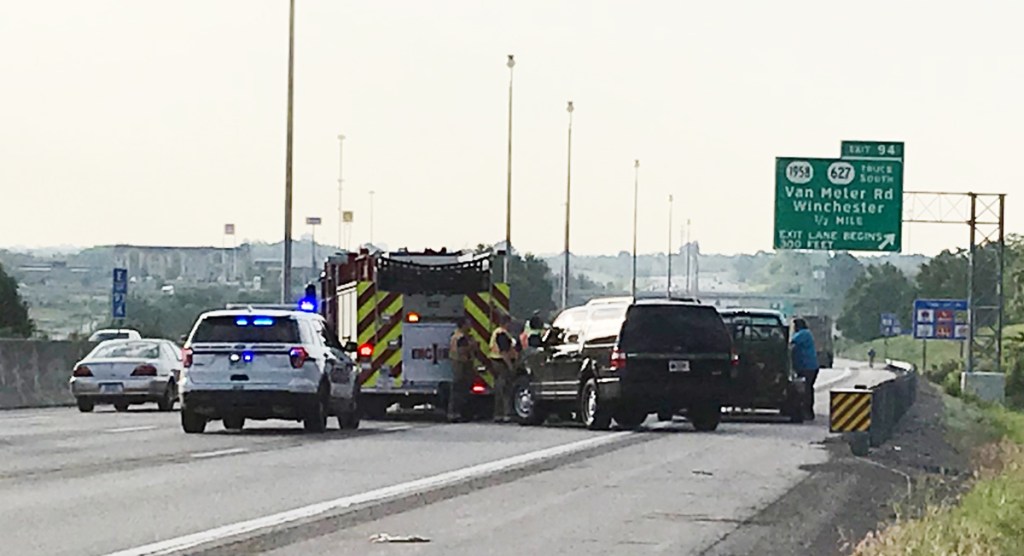 First responders stand by at the scene of a fatal accident Friday morning on Interstate 64. A pedestria n was struck by a passing truck, which continued traveling. (Photo by Fred Petke)

Police are searching for a Freightliner truck that struck and killed a man on the side of Interstate 64 in Clark County early Friday morning.

The crash was reported at 5:34 a.m. near the 93 mile marker in the eastbound lanes.

Brock was a passenger in a pickup truck pulling a trailer. When the driver, who has not been identified yet, stopped on the side of the road, Brock got out to perform a safety check on the trailer, Gayheart said. About that time, the tractor-trailer came along, struck Brock, clipped the pickup truck and continued east, he said.

Gayheart said the pickup and trailer were not completely out of the highway lanes when it stopped.

Clark County Sheriff Berl Perdue Jr. said witnesses could not offer a description of the truck, but part numbers on debris left at the scene indicated it was a 2009 or newer Freightliner. The truck would have damage on the right headlight and right front corner, he said. Deputies are reconstructing the accident and have been in contact with law enforcement in West Virginia to watch for the truck.

Gayheart said an autopsy will be performed, and no one else was injured.