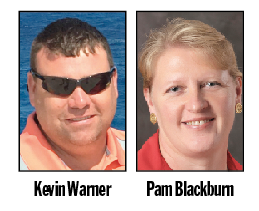 As expected, there will be a recanvass next week for the second district magistrate race.

Tuesday evening, Warner said he would request a recanvass.

Clark County Clerk Michelle Turner said Thursday morning she spoke with Warner, but the paperwork has not been submitted yet. The deadline for anyone to request a recanvass is Tuesday, she said.

Warner said Tuesday his check of totals from the precincts themselves showed him defeating Blackburn by six votes.

So far, no one else has requested a recanvass, Turner said.

All recanvasses will be conducted at 9 a.m. May 31 across Kentucky, Turner said.

In a recanvass, the clerks go back through the voting records from the precincts to verify the totals.

A recanvass is free to the candidates, while a recount involves examining the individual machines. The cost of a recount would be paid by the candidate requesting it.