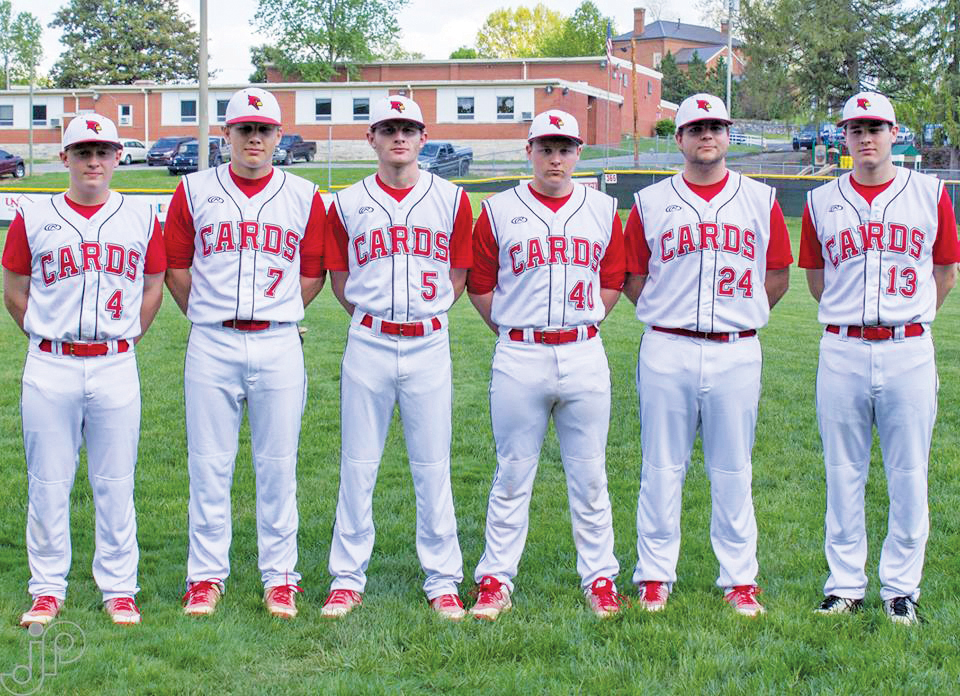 Bo Billings, Tyler Walton, Cameron Dove, Bryce Harrison, Austin Cartwright and Jake Ware ended their high school baseball careers Tuesday. The Cardinals lost to Campbell County 6-2 in the 10th Region Semifinals on Tuesday and they all have big plans ahead for their futures. (photo by Jon Paul Martin)

The defending 10th Region Champions were looking to repeat but fell short in the semifinals to Campbell County 6-2 on Tuesday.

Emotions were running high after the game when these seniors realized their high school careers were coming to an end and will not play with close friends and classmates again.

Through the wave emotions, each senior managed to look on the bright side to what they have to look forward to in their next chapters in life.

Jake Ware said he feels like his high school career went by in the blink of an eye.

“It ends quick for sure,” he said. “We struggled one year but it is a tough game. Any game could be your last in the playoffs.”

Outfielder and pitcher Bo Billings said he has experienced and seen everything imaginable in the game of baseball.

“I had some good times and I had some bad times,” he said. “All in all, I still love this game.”

Looking back on his career, first baseman Tyler Walton said he would not change anything.

“I love playing baseball for GRC,” he said. “It was a good four years and I enjoyed every minute of it.”

Shortstop Cameron Dove transferred from Bourbon County his freshman year and said he connected instantly with his new teammates at GRC.

“Baseball was good in Bourbon, but I had not experienced anything like this until I moved to Clark County,” he said. “It is just a great baseball program here and I learned so much. I love the team and I am going to miss them next year.”

Ware said there is a chance that he will keep his baseball career alive.

“I am going to work out this summer and try to walk on at Eastern Kentucky University if possible,” he said.

Billings will be headed to Georgetown College in the fall where he will be continuing baseball.

“I am going to keep working out,” he said. “I have to keep up and keep at it so I can be ready when fall comes around.”

Walton has a plan this fall that he hopes will unfold in his favor.

“I am going to the University of Kentucky and study engineering,” he said. “I am going to try and walk on to play baseball there so I am going to prepare for the season like I am already on the team.”

Dove is heading to the University of Pikeville to further his education and baseball career as well as reuniting with his brother who plays there.

“I am going to work out as much as I can,” he said. “I am going to try and get stronger and practice with my brother a lot. I want to get to know the team at Pikeville, too.”

Ware said that playing baseball has taught him a life-long lesson.

“Do not take things for granted,” he said. “Things end quick.”

Billings he learned how to adjust to adversity even when the cards were not in his favor.

“This is a game of failure,” he said. “Seven out of 10 times you will get out. You have to take the ups and downs and treat them all the same.”

Walton said that every one of his moments on the baseball field have mattered to him more than words can describe.

“Just enjoy the time you have while you have it,” he said. “You have to make sure you have fun with it.”

Dove said when he first got to GRC, the upperclassmen showed him everything that he knows now.

Head coach Matt Puckett said it feels like a piece is missing off the team now that the seniors will be moving on.

“We are obviously going to miss those guys,” he said. “They are some great ball players and a great group of young men. This was my only year with them unfortunately, but they were great leaders and really paved the way for the younger guys.”