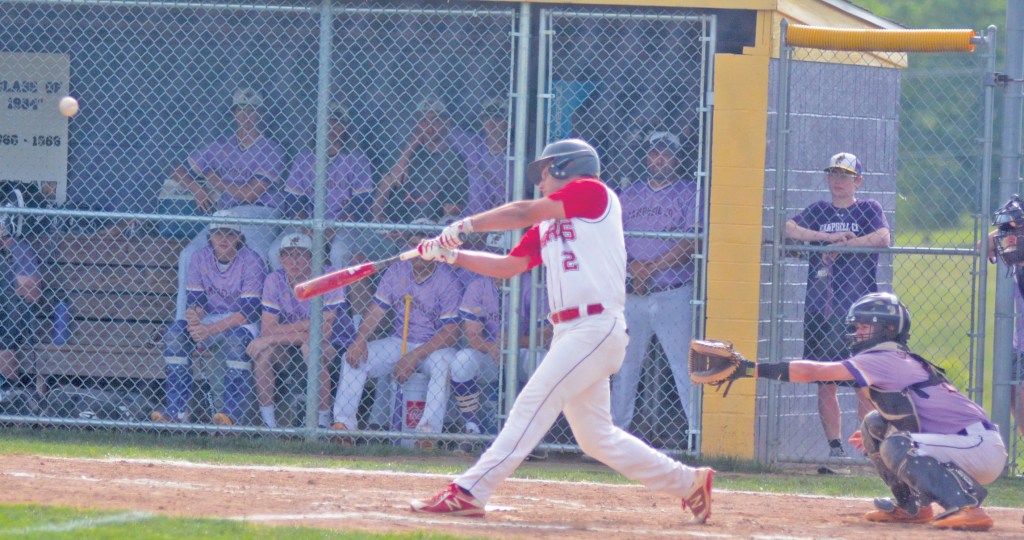 Caden Easterling hits a deep ball to centerfield and earns a double in the third inning of the 10th Region Semfinals against Campbell County on Tuesday. (photo by Micah Satterly)

George Rogers Clark’s season came to an end Tuesday as they fell to Campbell County 6-2 in the 10th Region Semifinals.

This was the second time the two teams have faced in two weeks.

The game could have gone either way as it was tied 2-2 up until the sixth inning as Campbell hit a single that scored two runs due an error on the throw to first base, giving the Camels a 4-2 late-game lead.

Campbell scored the last four out of its six runs in the game in the sixth and seventh innings.

Joe Austin achieved the first RBI of the game as he was able to drive Ethan Neal home after grounding out.

Caden Easterling led GRC on the mound as he pitched through six innings allowing seven hits with only one strikeout.

Austin came in to relief pitch for the last inning.

Easterling and Cameron Dove all managed to put up multiple hits for the Cardinals as they both collected two on the day.

GRC had two out of its three errors late in the game giving Camels the ability to score the game-winning runs which sealed their fate to the 10th Region Championship.

Campbell only posted one error for the game and both teams were even on hitting, both tallying seven.

Head coach Matt Puckett gave all the credit in the world to Campbell for coming out with a win.

“We just tried to stay focused and make plays,” he said. “They hit the ball better than us, but that is just baseball for you. We could have some crucial plays, but we didn’t and that is the way it happens.”

Dove admits that his team did not look alive when they needed to be at times during the game.

“I thought we could have hit the ball better,” he said. “Their pitcher did a great job, you cannot complain about that. Defensively, for about 90 percent of it, I thought we did good.”

Dove said this game will sting for a while, but has no choice but to move past it.

“I am just going to worry about college now,” he said. “We will move past it eventually and just get on with life.”

Dove will be headed to the University of Pikeville to further his athletic and educational career.

GRC will lose six seniors, two of which were preseason All-State in Jake Ware and Tyler Walton, but still sees his team having success next year.

“We started a junior on the mound in Caden Easterling,” Puckett said. “I thought he pitched a brilliant game. A game he threw well enough that we should have won. Then we backed him up in a sophomore. The future is bright for GRC baseball. We like what we have in the young bunch coming up. We are ready to take a couple weeks off and get back after it later in the summer and work on getting better.”

Puckett said there are three specific keys in order to be successful in the postseason.

“At this time of year, you have to make plays and be healthy,” he said. “Make plays, be healthy and put balls in play. Then you should have the recipe to success. Some of those things happen and some of those don’t. You cannot control things that happen as a coach and you have to get lucky with the draw in the reason and hope everything goes right from there on. Again, my guys played great. Nothing much we could have done to change anything. We just came up on the short end tonight and Campbell is a good baseball club.”

He said he already has some aspects of the game that GRC will work on in the offseason.

“We are going to work our pitchers quite a bit,” he said. “They have a lot of room to improve and I think they will. We will work on hitting although I feel like we hit it well this year. Just a bunch of defensive reps is what you have to have. The main thing is getting the pitchers out and throwing once or twice a week during the summer just to keep them fresh. We will go into the fall with the attitude that we will win the region.”