Puckett excited for GRC baseball for years to come 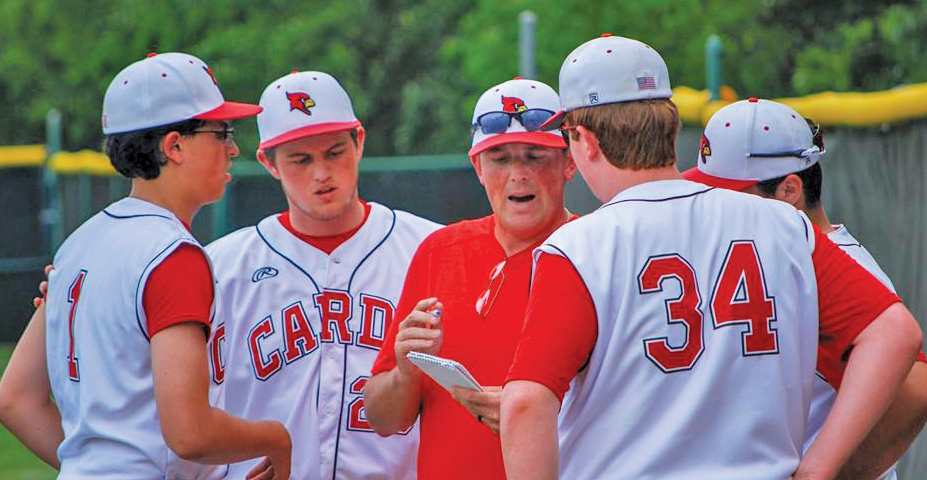 Head coach Matt Puckett said he felt like he fit in right where he belonged as he took over the baseball team after coaching the softball team for six years.

Puckett led the Cardinals to the District Championship and a semifinals appearance in the 10th Region Tournament.

He believes it was one of the best decisions he ever made when he got the baseball position.

“I started coaching high school baseball here at GRC when I was 20,” he said. “I was an assistant until 2007. Then I went to softball because of my father and I wanted to spend time with him. I spent three years as an assistant coach then got the head coaching job until 2017.”

Puckett said his father had a big influence to as of why he kept coaching softball but admitted how difficult it started to be once his father passed.

“When the baseball job came open it was almost like I needed to be back home,” he said. “Once my father passed it was tough on me on the hill. Not being able to hear or see him was a good chance for me to get back into the game I loved which is baseball. I feel like I am back to being a baseball coach which is where I feel like I belong.”

Puckett said he was happy with the progress he made in his first season getting back in to baseball and said baseball and softball are basically identical sports.

“I think it went well. All I knew was baseball so when I went to softball I was really lost,” he said. “I had a great mentor under Jackie McCloud. Luckily I had Larry Allison who taught me a lot more about the game. It was not much of a transition though, once I got used to the distances being difference again there was not much that was changed.”

He gave credit to baseball and softball players for their dedication and work ethic.

“Both guys and girls are athletes are very talented and I have coached girls who are just as tough as the boys,” Puckett said. “It is a game and it is the same basics. You have hit the ball, 21 outs, play defense and throws strikes. The only difference is you throw overhand in baseball.”

Puckett understood the way the team could have felt this year after the kids have been playing together their whole lives and then a new coach was throw into the mix.

“It was probably hard on the team having a new coach,” he said. “I hate that for them, but going forward, I feel like things will be more structured and I think the kids will buy into that. Our future is really bright.”

Puckett said he already has a different mindset into preparing the team see success next season.

“I think getting my way of coaching and my way of instilling the game to these kids starting this summer will play a big part,” he said. “I plan on starting next week on getting some kids and working out with them.”

He said a key to successful coaching is to stick to the game plan and to not let anyone affect the style.

“Whether my play is wrong or right, I want it done my way from the start to the end.” Puckett said. “I am there for the kids. I feel like I have got 31 kids because they all hold a place in my heart. Not only do I want them to learn baseball, but learn to be a man. Sometimes people are going to be hard on you but you have to strive and move forward. When I tell them what to do or how to do something better I am teaching them there is more to it than just the game of baseball. That is real life and it is like having a job. I need to teach them that is how it is going to be the rest of their life. I want to teach them to enjoy every minute.”

Puckett said his first season would not have been the same without the coaching staff and the community.

I had a great coaching staff,” he said. “They all were great coming in my first year and they helped me a lot. I had great parents and I never mention my wife and my son. I miss a lot of stuff because of baseball and coaching. She has been great and never gets upset. she knows when it is time for baseball that I am a baseball guy. She knows that and appreciates it. I know all the other coaches appreciate their wives and families for sticking with them through baseball season. We all miss out on a lot because of it.”

Although he was pleased with his coaching staff, he said he still has ideas to add to the program.

I think we are going to add a coach or two,” Puckett said. “I am going to pick up someone else and move forward. They all did a great job.”

Puckett said coaching baseball was the void he felt like needed to be filled and was thankful for the opportunity to be back on the diamond.

“It has been great and I had a wonderful time,” Puckett said. “Like I said, getting back to a baseball field was amazing. Not that i did not love softball but things change. When my father passed I needed a new beginning. The job was open and I applied and got it. I have had a pep in my step and I feel like I have had a lot of support from the team and the parents. I just feel like things happen in life for a reason and I feel like this was one of those things that needed to be. Hopefully these kids will buy into what I teach them and we can do some great things here with the GRC baseball program. You just have to hope these kids learn more than just baseball. If you can help one in just one little way then that is something that they can take with them the rest of their life.”