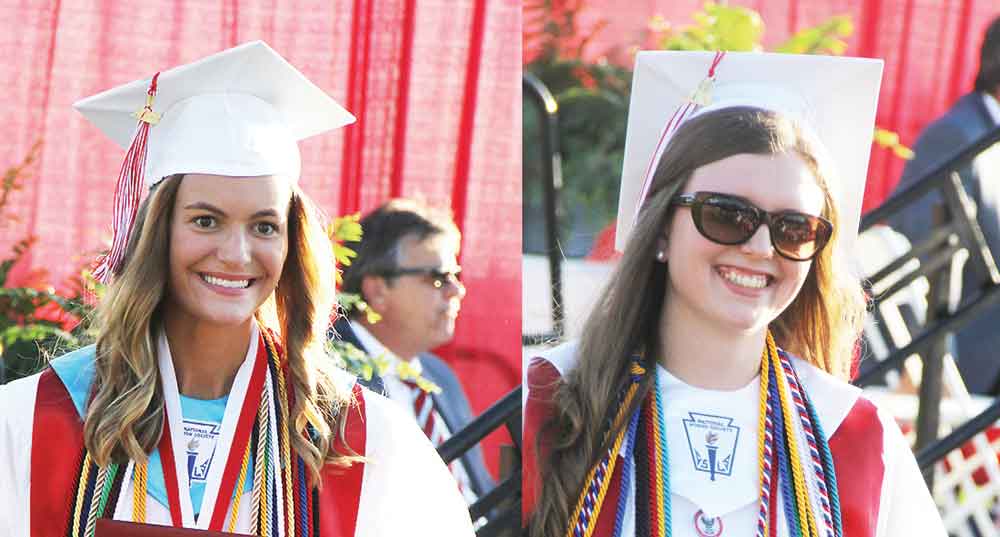 For the 426 graduates who received diplomas, Saturday marked the culmination of many years of hard work in and out of the classroom. But for Tess Neeley and Megan Riley, the occasion was particularly special as they were recognized for achieving the top grade point averages in their class.

Neeley and Riley were named valedictorian and salutatorian, respectively, and had the honor of addressing their classmates during the commencement ceremony.

Neeley, 18, the daughter of Sarah Neeley of Winchester and Sean Neeley of Maysville, finished her senior year with a cumulative 4.7 GPA. She plans to continue her education at the University of Kentucky in the fall to major in biology. She hopes to pursue a career as a dentist.

Riley, 18, the daughter of Mary Riley and Joseph Riley of Winchester, graduated with a cumulative 4.55 GPA. She plans to attend Morehead State University and major in nursing. She hopes to pursue a career as a midwife or in dermatology.

Riley is president of Beta Club, treasurer for National Honor Society and Christian Fellowship, a member of Cards for Paws and senior advisory. She is also an active member of the Central Baptist Church youth group acting as youth praise band leader and a small group leader.

In her commencement speech, Neeley touched on some of the commonalities of the class of 2018, particularly shared memories, “like the paint war before our first football game, or the pride we all felt and shared each time we beat Montgomery County.”

She likened life to a ladder, with many rungs that she and her classmates will need to climb. Sometimes you move up the ladder, and sometimes you fall back down. But you can never give up, she said.

“Without question, we are all going to slip at some time or another, fail a test, or completely blow a job interview,” she said. “The point is, we must continue to climb, and keep reaching for the top, striving to meet our own highest potential.”

Despite any hardships life might throw their way, Neeley challenged her fellow graduates to look on the bright side.

“Make each day count. It is now, at the end of our time together, that we realize just how quickly time passes, so don’t waste a day,” she said. “Go out and make an impact with your life. Change the world. Stumble, fall, jump for joy, and if you dare, skip a rung or two.”

Riley described her feelings about graduation with one of her commonly-used themes in high school.

“The only word I can come up with to describe how I feel in this moment is blessed,” she said. “It has truly been an adventure doing life with you all these years.”

Riley said the class of 2018 is full of potential.

“We have a lot of intelligent and driven people who could and probably will impact our world,” she said.

She left her fellow graduates with two pieces of advice: “Never let your fear of failure stop you from chasing your dreams … and always look to God to direct your path. Then, you can never go wrong.”