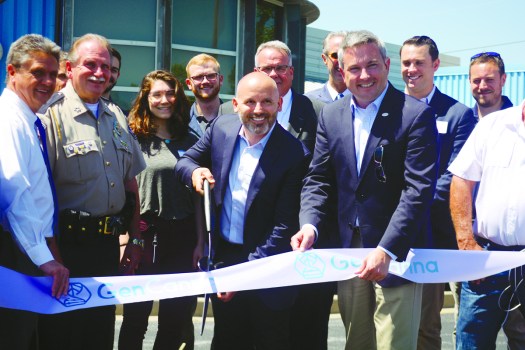 The building at 321 Venable Road will be used mainly for marketing, administrative and sales departments.

The GenCanna Hemp Research Campus is located on nearly 150 acres of farmland on Colby Road, which was previously used by a multi-national tobacco firm as a research facility, according to its website.

Matty Mangone-Miranda, CEO of GenCanna Global, said the new facility is a nod to the company’s growth.

“This is a great moment for our business,” he said. “We are growing fast.”

GenCanna is a local hemp business that champions itself on being a world leader in hemp genetics, CBD formulations and legislation, according to its website. The company focuses on scaling premium agricultural hemp production for food products to promote easy availability locally, nationally and globally.

Mangone-Miranda said the company started with only a few hundred plants in the ground in 2013 and this year, they have about three million. He said he hopes GenCanna is listed as one of the large hemp business on NASDAQ within the next two years.

“We are trying to make Winchester the capital of Kentucky for hemp,” he said.

“Industrial hemp is not a novelty crop,” Quarles said. “This is a real crop, a crop that has a lot of history here.”

Quarles said hemp is a source of economic development for the state.

“Now is the time to legalize industrial hemp,” he said. “Federal law is the biggest impediment with the expansion of industrial hemp. And once we make that change, you’ll see the floodgates open for investment.

“We want Kentucky to be positioned as the epicenter for industrial hemp in the United States, just like it once was.“