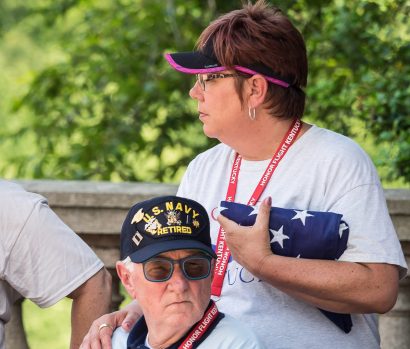 Kim Thacker stand with her father Robert Hood at the Tomb of the Unknown Soldier during their May 26 Honor Flight to Washington, D.C. Thacker was her father's guardian on the trip. (Photo by Tami Steiger) 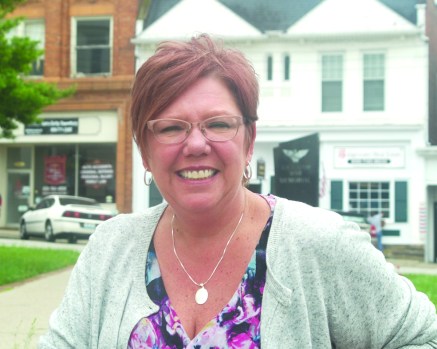 For years, George and Kim Thacker volunteered for a number of military causes.

It made sense. George was a veteran of Desert Storm. Kim’s father was a career Navy man, and there were many, many veterans throughout her family.

“It’s just who we were,” she said. “It was all we knew. All of George’s family was veterans. It’s family heritage.

“When you are a veterans of came from a military lifestyle, I tell people it’s a different world. Veterans take care of each other in a way that’s almost unexplainable.”

After George and Kim got married, he served as an associate pastor at Broadway Christian Church, the chaplain for VFW Post 2728 and, most recently, as the chaplain for  Honor Flight Kentucky which formed in 2015. Honor Flights take veterans on a one-day trip to Washington, D.C., to visit a number of service and war memorials around the city. Each veteran is accompanied by a guardian throughout the trip, and veterans travel for free.

“George went on an Honor Flight last year,” Kim said. “His veteran was a Mr. Love and he turned 92 the day after the Honor Flight came back. … We made sure Mr. Love knew who we were and we knew Mr. Love (before the trip). When they went on that flight, they were buddies. We’re still in touch to this day.”

George, though died in May, about three weeks before the May 26 flight, which included Kim’s father.

“George and I were supposed to go on that flight together,” she said. “They called and asked if I wanted to go still. This trip was probably a little more emotional considering the circumstances but I have to say I was beyond grateful to be able to go on the trip with my dad.”

At the Tomb of the Unknown Soldier, Kim carried a flag that was flown over the U.S. Capitol in George’s honor and presented by U.S. Rep. Andy Barr, she said.

“This was the first time in I can’t tell you how long … that my dad and I were able to spend 14 hours alone together,” she said. That alone is worth more than money can buy. It was just being with him and watching him enjoy himself and see things he hadn’t seen before.”

Kim said she attended several of the send-off and welcome-home events for previous flights, but actually being on the trip gave a new perspective.

“It was very neat to see some of them interact,” she said. “You just never know who will be on one of those flights. There’s so much history on that plane.”

Kim said she plans to stay involved in the years to come.

“I will probably do a lot for Honor Flight — whatever they ask,” she said. “The experience those veterans get is so incredible. I would do every single trip if they’s let me. It would be an honor to do this trip again.”