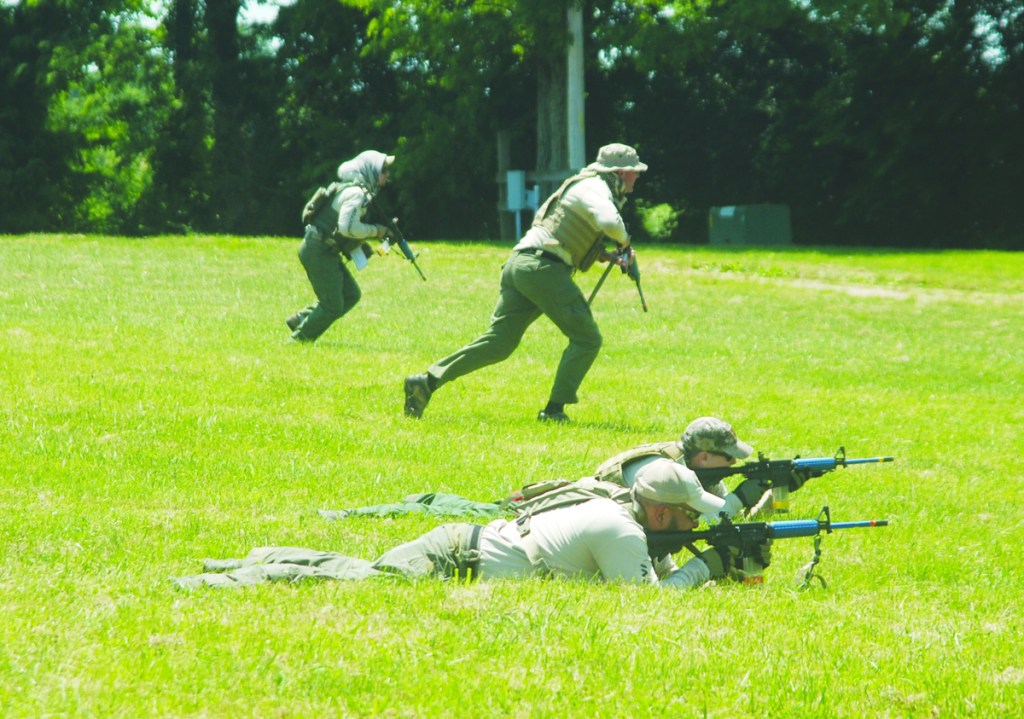 Instructors from Advanced Law Enforcement Rapid Response Training in Texas demonstrate responding to an active shooter scenario in an open area during a training session Tuesday at the Clark County Fairgrounds. The class for local and regional officers will also certify them to teach the material to their home departments. (Photo by Fred Petke)

Four officers fanned out as they crossed the grassy field at the Clark County Fairgrounds, on alert for a possible shooter on the property.

Shots start ringing from across the field as a subject dressed in tan pops out from behind a large truck. The officers hit the ground and return fire.

When the suspect appears to be shot, the officers begin making their way toward the person, verify he does not post a further threat, radio for help and secure the scene until help arrives.

The scenario, and many others, were repeated Tuesday as 18 law enforcement officers from multiple agencies in Kentucky and Tennessee, including Winchester Police, Clark County Sheriff’s Office, Lexington Police and Tennessee Valley Authority Police, attended a week-long class about responding to external active shooter situations.

The class, taught by instructors from Texas-based Advanced Law Enforcement Rapid Response Training, was offered at the Clark County Fairgrounds by the Winchester Police Department and Clark County Sheriff’s Office.

Instructor Martin Oviedo said the session not only trains the officers attending but certifies them as instructors to take the information back to their agencies and conduct the classes there.

The class is designed to help first responders and those who are first on the scene for active shooter situations, including EMS personnel and those from different agencies.

“We can’t wait for the SWAT team,” Oviedo said, which takes, on national average, 45 minutes to respond to a situation.

The classes include three days of active outside training and two days of classroom sessions and instructor tests and teaching sessions.

The material offered in the class draws from case studies of actual events, Oviedo said, and offers several techniques and options in responding to situations, including helping the victims afterward.

ALERRT also offers a class designed for police, fire and EMS personnel to train together for active shooter situations.

“We use a lot of case studies to prove a point,” Oviedo said. “We use them as lessons learned. We’d rather you have a lot of options than no training and no idea what to do.”