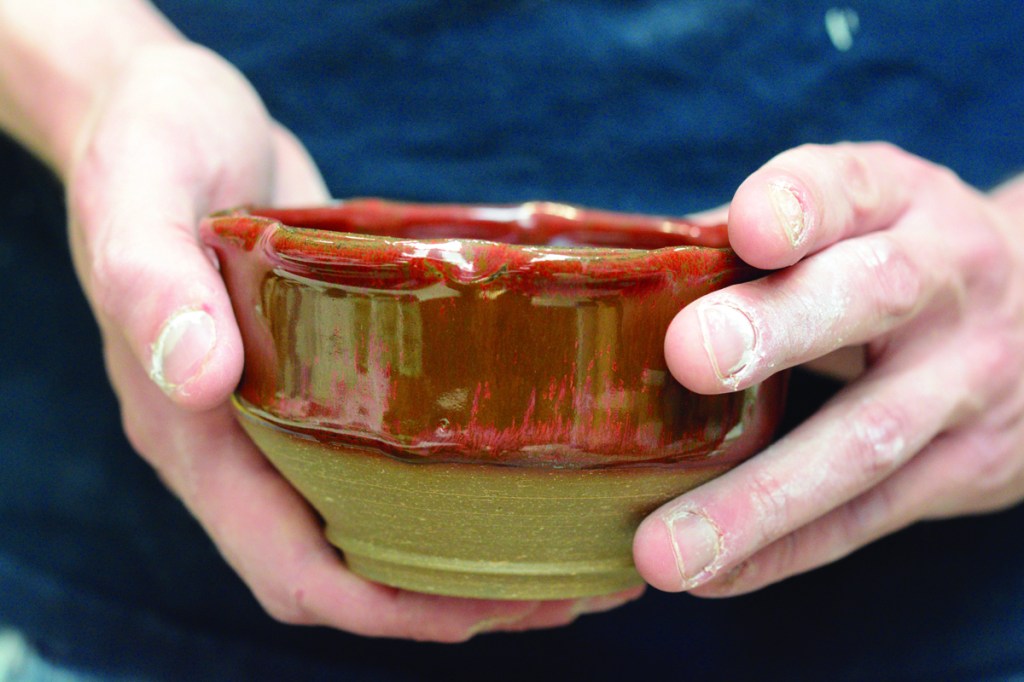 Carvel Norman, owner and potter at Dirty South Pottery, holds one of the 300+ ice cream bowls that will be sold at Scooped, a charity event that will be held on August 4 starting at noon. Norman, his wife Ashley and about 10 other local potters made the bowls. Bowls will be sold for $12 along with a voucher for ice cream during the event. One hundred percent of the proceeds will go towards the Clark County Homeless Coalition.

On Aug. 4, Clark Countians can eat ice cream for charity.

Carvel Norman, owner and potter at Dirty South Pottery, said he has been working with Michael Andrews, The Greater Clark Foundation and the Artisan Guild to create the new summer event to be held on the block of North Main Street.

“The best way for me to help my community is to do what I do best and use my talents to make a difference in the community,” Norman said.

Norman created Scooped, a one-day market, with the concept of the Empty Bowls Project in mind. Event attendees can purchase an ice cream bowl at the event for $12.

“We’re now in talks with different gelato and ice cream places, so we’re going to be able to actually fill those bowls with ice cream the day of,” Norman said.

All proceeds from Scooped will benefit the Clark County Homeless Coalition in hopes of paving the way for substance abuse counseling within their shelters, Norman said.

Norman and his wife, Ashley, along with about 10 other local potters came together to make more than 300 handcrafted ice cream bowls. Those bowls along with a voucher for ice cream from a local vendor set up that day, will be sold at the event.

Along with the ice cream, Norman said the potters that contributed might also set up booths to sell products during the event.

Norman said the event started as an idea after participating in the Winchester Public Innovators Lab in partnership with The Greater Clark Foundation.

Norman said there is a lot that goes into setting up this event such as making the bowls, coordinating vendors, getting proper permits, marketing, finding volunteers and more.

Norman said the primary goal is to sell out of bowls, however long it takes. The event is slated to start at noon and will continue as long as supplies last, he said.

“We want to get as much money into the hands of the Homeless Coalition as we can,” he said.

Norman said as a small business owner, he’s never questioned giving back to the community.

“You can open up your doors, but without the support of the community, you won’t make it,” he said. “We owe all we have to this community.”