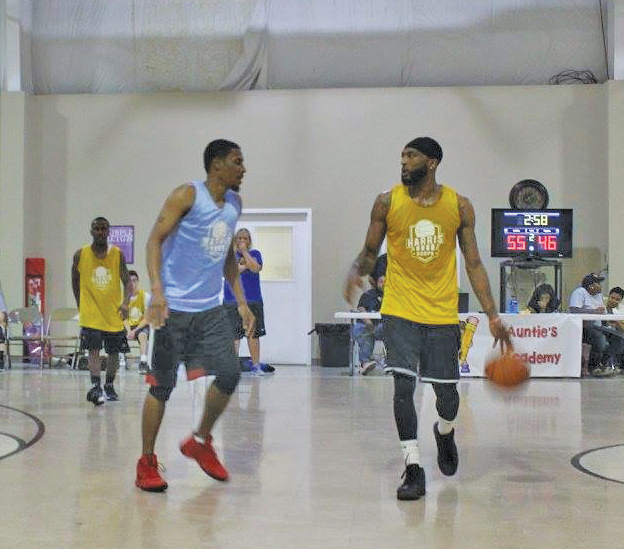 Harris Hoops summer basketball league is returning on June 23 for the second year in a row. Teams have until June 14 to register and is $35 per player. It is a co-ed league and players ages 15 and up have the opportunity to participate in five-on-five full court games.

Founder of the league, Bo Harris, said he has had the idea of creating the league for a while before he finally decided to take the steps in reaching the goal.

“I have been wanting to do it for two or three years now,” he said. “I finally got a venue to do it at which is First Baptist Church. I got the venue and talked to some of my close friends and it came together. I advertised it and put it together and it was just a vision I had. it all ended up working out.”

The first year of the league exceeded Harris’ expectations and he was pleased on how it turned out.

“The first year was a huge success,” he said. “We had a good variety of players and young players, as well as older players to build a competitive nature to it. It is very exciting and and I really think a lot of people enjoyed it as well as myself.”

Harris said the only rules he will change this year is enforcing the shot clock.

I decided to add the shot clock to make the games as realistic as possible,” he said. “We want the games played at a high level. We do not want teams holding the ball too long, we want to have it uptempo. I also have two eighth grade basketball teams that will play against each other as well. ”

Harris’ goal is to get the community involved in every way possible and has a special plan to keep people interested.

“On opening day, we will have an all-star bash with two teams with disabilities,” he said. “I work with two companies in Lexington called Sunny Side and Employment Solutions. I actually put the idea together about them playing a game and they got really excited about it. I decided to tie that in with my league and do it with my intermission sessions with the games in the league. Both businesses are on board with it. It brings excitement to them and the players who play in the summer league to see what these guys have been working on, and it’s very humbling to watch as well as to partake in it.

Harris is anxious to see what the future holds for his league and is dedicated to making it a known event in the community each year.

“I have exciting expectations,” he said. “I plan to grow the league from eight to 10 teams. I am looking for it to have more competitiveness, community support and more talent. I am definitely expecting some growth.”

I think it is as great as the city makes it. it could be really really great. It is beneifical for the younger teenages to interact with the older generation. it kind of bridges the gap. The compatibility between them builds a sense of responsibility and a sense of leadership from the older guys and women and it is co-ed. its a responsibility for the younger guys who see the older guys out in the community and it allows them to show respect and gives them someone on their side to help them out.

He admits he was surprised by the positive feedback he received from the viewers and participants.

They really enjoyed themselves,” Harris said. “People take it really serious and they are excited to play and be in real competition. You could be playing someone who has a close skill level or someone of equal talent. It is fun to see the guys compete and see people play. A lot of people showed up to watch and it was a really fun event.”

He hopes to continue the tradition of the league every summer.

“I am definitely trying to make it every year,” he said. “I am hoping for it to outgrow the venue it is now and hopefully move it to a bigger place like Campbell Junior High or GRC if we get more teams. I am hoping the community gets behind it and it could be really beneifical. If we all rally behind it and keep the flame going then this league will last a while.”

Harris claimed he has had people reach out to him due the excitement of the league starting back up.

“Feedback wise, I think a lot of players that participated in it are very excited to play again,” he said. “They have the opportunity to play with a variety of different players or even against their friend’s teams.”

Harris said this year will be a new opportunity for players to showcase their skills.

“There were some guys who couldnt play due to injuries or kids who werent old enough who couldnt play. they will get to see what level they are on competitiveness wise and have the chance to see if they can win.”

All games will be played at First Baptist Church, 37 North Highland Street in Winchester.

Bo Harris can be contacted at harrishoopsbasketball@gmail.com.