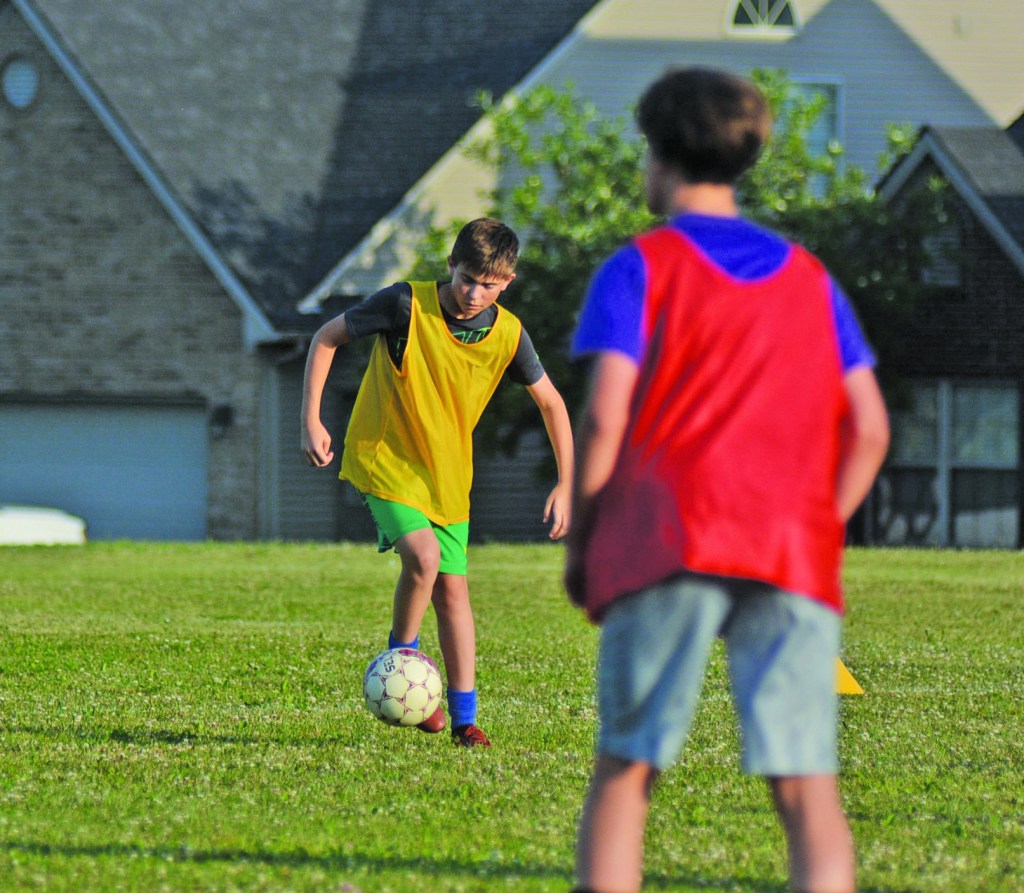 Myles Clark looks to make a move during a drill at practice Tuesday. (photo by Micah Satterly)

However, despite the rally, both seasons resulted in losses in the first round of the 39th District Tournament.

GRC lost 10 seniors but head coach Walt Ridener still has plenty of faith in his new team and said he will depend on the returners to use their experience at full force.

Although the summer offseason just started for soccer, Ridener said he likes the work ethic of the team so far.

“This is only our second or third week doing these workouts,” he said. “It is not required to be here. We just want to give those who have the opportunity to be out here a head start. What I have seen so far is their strong work ethic. Sometimes when you do repetitive stuff, they get bogged down and tired of it. Their work ethic is a lot better than what I have had in the past. Last year’s team was great, but these guys are ready. They know it is open and they know it is anybody’s team basically. You lose 10 seniors, and now you only have one guy here that was in the starting lineup, means anybody can earn a spot.”

Ridener claimed the offseason is what establishes the difference between great teams and average teams.

“The offseason is very important,” he said. “The true season starts July 15 and from then until August 15 is only a month of training. The stuff that you need to build on within that month is more tactical than touching and conditioning. We try to get a head start on that stuff now so when they come in to tryouts, they will be more conditioned and better touches. That way we can progress from there.”

Ridener admits the team may struggle in finding a new system that fits after losing 10 seniors.

“It is definitely going to be a new year for us,” he said. “I coached those seniors last year in club teams and even when they were freshmen so they were ready to play. I have also had the seniors and juniors this year for quite a while. It is really an unknown right now. I know a lot of these kids have talent. Some of them play clubs at the highest level and it is just a matter of getting them together on paper and on the field to make things work. We may take some bumps and bruises at the beginning, but at the end of the season is what really matters.”

Ridener stated he could not imagine his life without helping to mould high school student-athletes into the best form of people as possible.

“This is literally what I live for,” he said. “Besides my family and God and all that, this is what I live for. I do not have a child playing or anything like that, but I just like to get out and see these guys and the program progress. It is not always about soccer. It is about growing as a man and getting away from the crazy stuff at school. I want to help show them the right way to live their lives. We hold them accountable for all their actions. When you grow up, you have to learn to stand on your own and that is one of things we try to teach.”

He said he wants to teach them the importance of having a worth ethic as well as enjoying the game.

“The most important thing is hard work,” Ridener said. “Do not take it for granted that you are the best soccer player in the world. If you were, you would be playing in another league than what we have here. You own your work ethic. In the end if you do not succeed, it is not because you did not try. For some reason it just means that it was not in your cards at the time. It is the hardest thing for me to get kids to understand is to get outside the box that they live in. High school is only four years and is gone in a heart beat. Live in the moment now, work as hard as you can as do not think about the what-ifs later. Give it all you have right now while it is right in front of you. Basically that is how I lived.”