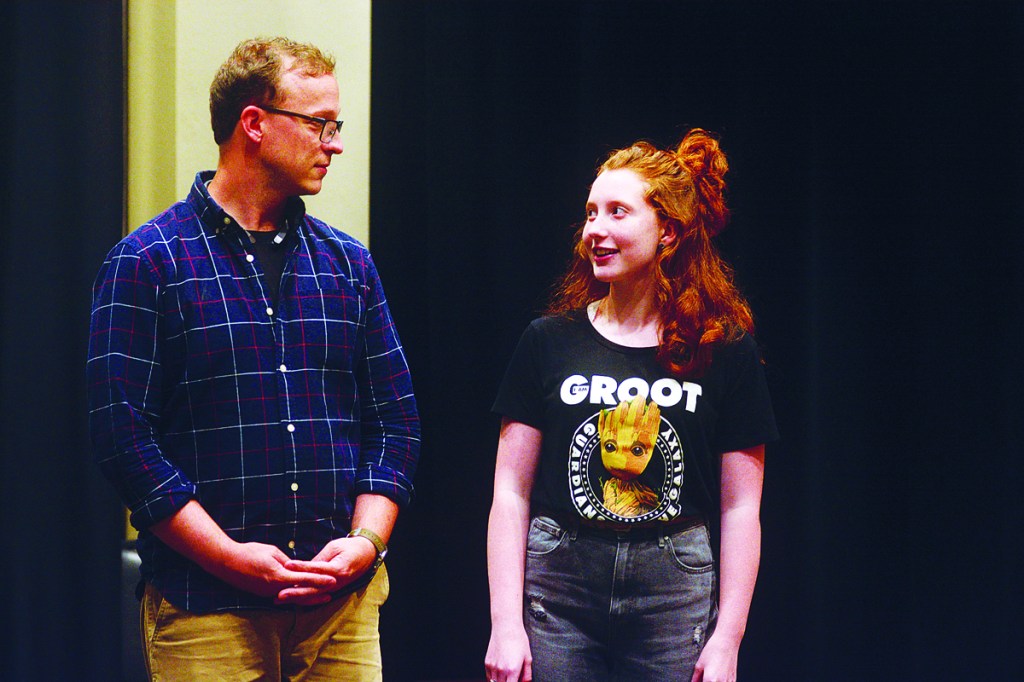 Ben Sollee acts out an encounter he had while in California with Eleanor Ickes, a Leeds Youth Advisory Board member from Lexington. Sollee is the guest musician in tonight's premiere of "Outside our Doors" at the Leeds Center for the Arts.

An African-American mother is afraid to shop downtown because of fear of being watched. A girl questions why no one believes her as she tries to share her story of sexual abuse. Another person hides their true self because identifying as part of the LGBTQ+ community can be cause for judgment and bullying.

“Outside Our Doors” sheds light on these true stories that have happened and continue to happen in Clark County.

The play premieres at 7:30 p.m. today at the Leeds Center for the Arts.

Playwright Margo Buchanan and the 20-member Leeds Center for the Arts Youth Advisory Board wrote the show based on interviews conducted with Clark Countians from various backgrounds.

Sarina McQuerry, a Youth Advisory Board member, said the play aims to show the realities and hardships of life in Winchester and presents the idea that change needs to happen.

McQuerry said she also learned more about issues she hadn’t thought of as much such as racism and homelessness in the community.

“I had a closed-minded look on homelessness, and it opened my eyes to the truth about it and the reality,” McQuerry said.

With the help of a What’s Your Ambition?! grant from The Greater Clark Foundation, the board worked with Buchanan and guest musician Ben Sollee to draft “Outside Our Doors.”

McQuerry said she was on the writing team that had a direct impact on the script.

“We were part of the writing process, and it’s really neat to see it on stage now,” she said.

The documentary-style play invites the audience to consider how the people and events of a small-town shape the fabric of the community.

“Our youth are passionate and feel a higher calling to bring these often-hidden topics into the open,” Tracey Miller, president of the Winchester Council for the Arts, said in a statement. “They want their community to be a place where people look beyond stereotypes and reach a hand out to help others.”

McQuerry said the goal is to get more people thinking about these topics and to start the conversation.

“One of the last lines of our second act is, ‘Well, you kids certainly got a conversation started. Now what?’” McQuerry said.

Talking about the issues is the first step, and from that, the community can work together, she said. Another goal of the play is to, overall, get people talking to others in the community — to those they might not have usually started a conversation.

The Youth Board consists of high school leaders from five area counties who meet biweekly to work on arts-based projects, strengthen leadership skills and enhance the community through enrichment opportunities, according to a release.

It’s also a way to spark change, she said.

“Outside Our Doors” runs June 8, 9 and 10 at Leeds Center for the Arts. Friday and Saturday performances begin at 7:30 p.m. and the Sunday matinee is at 2 p.m.

Tickets are $10 and may be purchased in advance at LeedsCenter.org.

McQuerry said she hopes people come see the play because it’s an accurate portrayal of events in Winchester.

“This is actors, but it is true stories,” she said.