Where in the World: Early Kentuckians in the National Portrait Gallery 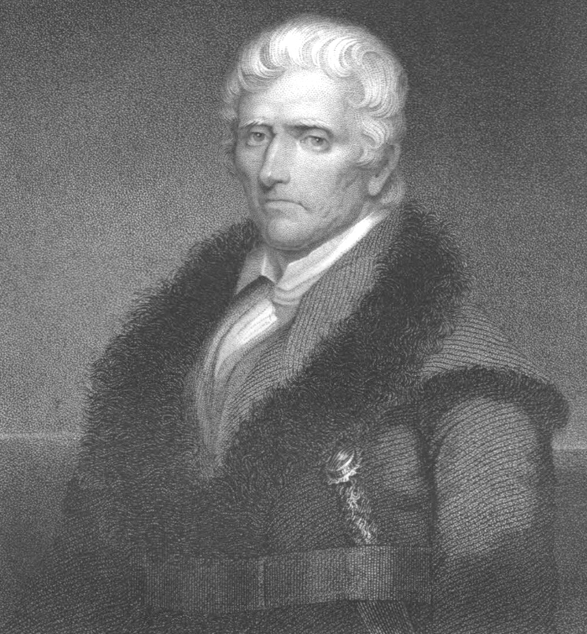 The 1859 edition of the National Portrait Gallery of Distinguished Americans contains biographies and likenesses of six Kentuckians with ties to Clark County.

Two of these were reviewed in Part 1, published in the May 25 edition of The Sun.

The remaining four are examined here.

As we have seen before, Daniel Boone (1734-1820) left his footprints all over Clark County. Our historical highway markers alone tell much of his story here: “Indian Old Fields,” which he viewed from Pilot Knob in June 1769; “Lulbegrud Creek,” where he camped with five other hunters in 1770 and named the creek for a town in Jonathan Swift’s Gulliver’s Travels; “Daniel Boone’s Settlement,” 1,400 acres near Schollsville, which he was awarded for growing corn in Kentucky in 1775 and 1776; “Boone-Callaway Girls Kidnapping” in July 1776, which resulted two days later with Boone’s rescue party freeing the girls from their Shawnee captors; and “Daniel Boone, Surveyor,” marking the area where he conducted the first 11 surveys of his career for Capt. Billy Bush in 1783.

James B. Longacre made the engraving of Boone after an original oil painting by Chester Harding.

Harding made his portrait in 1820 only a few months before Boone died — the only portrait made of Boone painted from life — and it now hangs in the National Portrait Gallery in Washington, D.C.

Simon Kenton (1755-1836) would have been almost as famous as Boone had he had a good biographer. This noted frontiersman went west as a youth — using the assumed name of “Simon Butler” — after mistakenly believing he killed a man.

He soldiered during the Revolutionary War, the Indian Wars and the War of 1812.

As a captive of the Shawnee, he survived ritual torture and running the gauntlet several times and was subsequently adopted by the tribe.

After being imprisoned for debt in Kentucky, he moved to Ohio.

Kenton was a Clark County landowner, having purchased Ebenezer Corn’s preemption from speculators. The land straddled US 60 near the present Montgomery County line.

Kenton sold off this 1,000-acre tract in six parcels. One parcel went to John Baker, who established Baker’s Station on the land in 1790. Baker was later credited as the founder of Winchester.

R. W. Dodson’s engraving of Kenton was made from a portrait by Louis Morgan, commissioned by J. B. Longacre in 1834.

Gen. George Rogers Clark (1752-1818), the noted soldier from Virginia, commanded the Kentucky militia throughout most of the Revolutionary War.

He is best known for his celebrated captures of Kaskaskia (1778) and Vincennes (1779) during the Illinois Campaign, which greatly weakened British influence in the Northwest Territory.

The British ceded the entire Territory to the United States in the 1783 Treaty of Paris.

Clark is often referred to as the “Conqueror of the Old Northwest.” He died at his home, Locust Grove, in Louisville.

The 22-year old Clark came out from Virginia in 1775 as a deputy surveyor for the Ohio Company.

Clark joined a group on the way to Boonesborough. From there, he crossed the river and proceeded to the waters of Grassy Lick and Somerset Creek, intending to claim lands in the area. There, he made a private survey of 15,000 for himself that was never patented.

Clark’s presence here is noted in numerous pioneer depositions. Clark County was named in his honor when established in 1792.

The engraving by T. B. Welch was made from a portrait by Longacre after an original painting by John W. Jarvis.

According to Estill Curtis Pennington’s “Lessons in Likeness,” Jarvis made his painting from a life portrait of Clark at Locust Grove by either J. Cook or Joseph Henry Bush.

Gen. Zachary Taylor (1784-1850) served as the 12th president of the United States. Since he died after only 16 months in office, his administration is little remembered today.

Taylor established a stalwart, if not heroic, reputation as a soldier.

“Old Rough and Ready” served as an officer in the War of 1812, the Black Hawk War, Seminole War and Mexican-American War. He is buried in the Zachary Taylor National Cemetery in Louisville.

Taylor’s tenuous connection to Clark County is through his numerous pioneer Taylor cousins from Virginia, who located here. These include Hubbard Taylor of Spring Hill, Jonathan Gibson Taylor of Basin Springs and many others.

T. B. Welch’s engraving was made from a daguerreotype by the early American photographer James Maguire, captured in New Orleans in 1847 on Taylor’s triumphant return from the Mexican War.