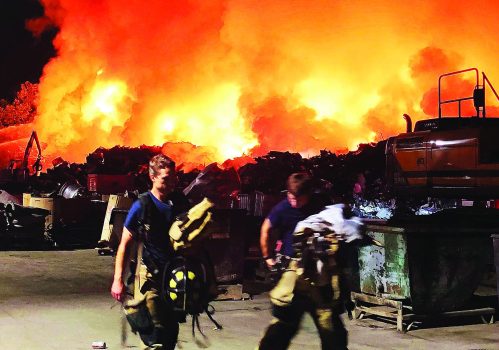 Firefighters from approximately 30 Central Kentucky departments aided at the scene of the fire over the weekend. (Photo by Gail McCord) 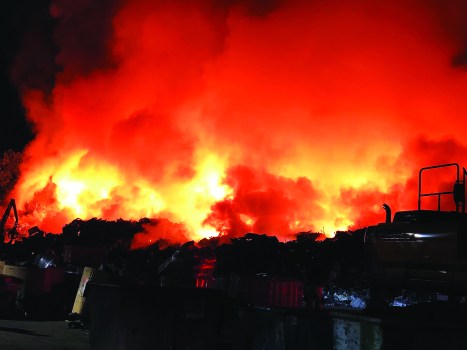 A fire at Stuff Recycling on Lexington Road was reported at 4 p.m. Saturday. After about 48 hours, the Clark County Fire Department continued working at the site to handle hot spots within a massive pile of debris from the fire. (Photo by Gail McCord, American Red Cross volunteer) 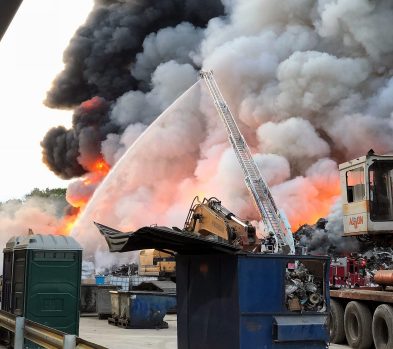 Clark County Fire Chief Ernie Barnes said Monday the fire was under control and his department was working to tackle hot spots throughout the massive pile of debris on site.

Barnes said Stuff employees are using the large picking equipment at the local recycling facility to move the debris so firefighters can wet it and put out hot spots.

“We’re still in the suppression phase,” Barnes said. “We’re going to move soon into the investigation phase, so at this point, we still do not know what the cause of the fire was.”

Barnes said the call came in about 4 p.m. Saturday at Stuff, located at 6169 Lexington Road. According to the Stuff website, the facility exchanges various types of metal scrap for cash and works with commercial and non-commercial customers. The facility accepts everything from cans and household appliances to industrial scrap.

When crews arrived, the massive pile of recyclables was heavily involved. Barnes said the pile was approximately 200-feet long, 60- to 70-feet wide and nearly 30-feet high at first estimates.

“Of course, as the under layers burned, that got smaller,” Barnes said. “But it was a pretty good sized pile, and at one point, it was on fire from one end to another.”

The pile was filled with things like scrap cars and metal appliances, which made battling the fire more complicated.

“Those scrap cars had tires on them, some had residual fluid — gas and oil — left in them,” he said. “Pretty much any kind of appliance you could think of, washing machines and ovens, anything, has plastic on them. There was a lot of hydrocarbon in that debris.”

Additionally, the department protected two adjacent buildings, just 50-feet away from the fire.

Barnes said some damage occurred to the equipment at the scrap yard, but it was largely confined to the pile.

“If you have to have something on fire, it’s better that it’s scrap than the equipment or buildings,” Barnes said. “But this still represents a big loss to the business and will require a lot of clean up. It’s a big impact to the business.”

The scale of the fire was highly uncommon for local fire departments as well, Barnes said.

“This is definitely unusual for us due to the scale of the incident,” he said. “This is also an industrial facility, but it’s out in the county, where we don’t have the water supply we would typically have. It’s a lot bigger-scale fire than our department is used to, especially in the scale of the apparatus and equipment necessary. That’s why it took so many agencies to get it under control.”

Barnes said a final total is not available, but he estimates at least 30 area fire departments assisted. His agency is part of BERT (Bluegrass Emergency Response Team) that facilities assistance with multiple Central Kentucky agencies. The monthly meeting is set for today, when Barnes anticipates he will get a more concrete number of how many other agencies assisted.

Throughout the weekend, the American Red Cross was on scene to provide water and many people in the community donated cases of water to keep the firefighters hydrated.

Barnes said his department set a six-hour time frame for firefighters battling the blaze in sometimes more than 90-degree temperatures.

“The hot weather certainly was a struggle,” he said. “We had to work to keep our guys hydrated. The community really came out and helped, from the Red Cross to neighbors in the area.”

Rain that hit the area Sunday had a two-fold impact, Barnes said.

“The rain helped suppress some of the smoke and steam,” he said. “Of course, by the time it showed up, we had largely knocked down the large bodies of fire. It definitely helped cool things off. Frankly, the guys were getting a little cold there for awhile. They got soaked. So there were two extremes we had to deal with weather-wise.”

Barnes commended his department and the various others who were on site to help.

“My guys and all the guys out there, they did a great job,” he said. “They took it as they always do, they faced their challenges and they worked through it.”

Barnes said his department will remain on site for at least a few days to continue to wet hot spots and keep the pile cool. As they reach the end of the debris, they will begin looking at the potential causes.

“It’s always hard to determine the cause of a large fire,” he said. “But we’ll take it like we always do, go to the point of origin and work there.”