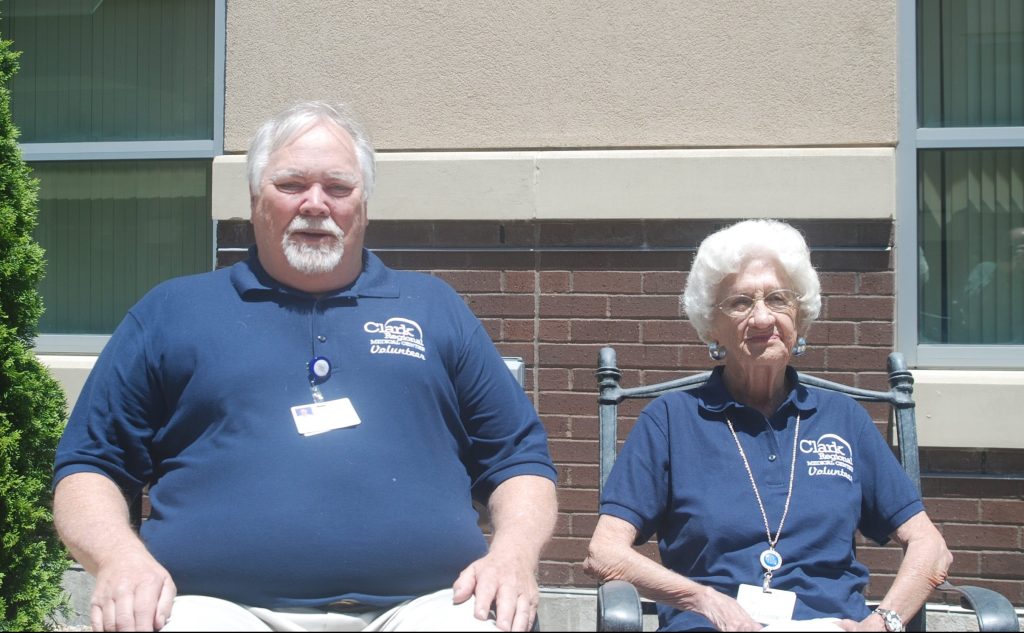 Karl Blackwell, left, and Phyllis Hanks are two of the more than 40 active volunteers who have helped contribute nearly 500,000 hours of service to Clark Regional Medical Center. (Photo by Fred Petke)

For nearly five decades, a group of volunteers has been filling some of the gaps in Winchester’s hospital. They have also been busy raising money for projects inside the hospital and throughout the community.

The Clark Regional Medical Center Auxiliary, now in its 48th year, is nearing the 500,000 mark, both in hours of service and in money raised.

Auxiliary President Karl Blackwell said the vast majority of the group’s revenue comes from the hospital’s gift shop, which is run by the auxiliary. The rest comes from other sales throughout the year, including jewelry sales.

Volunteer Phyllis Hanks said the group, which is  organized as a non-profit, has to give its proceeds away. A number of organizations throughout Clark County benefit, including the Clark County Animal Shelter, Honor Flight Kentucky and the Beacon of Hope Emergency Shelter, among others.

The auxiliary most recently gave $3,750 to Chad Burkhart, Gina Lang and Dr. Larry Ertel who are participating in a Juvenile Diabetes Research Fund bicycle ride in Florida later this year.

“For the hospital, we’ve purchased wheelchairs,” Hanks said. “We buy sleepers for preemies.”

It’s all done with the goal of improving things for patients and their families.”

“We’ve bought a pager system for families,” Blackwell said. “We just put a phone charging station in. We’re getting ready to place some raised (garden) beds for the transitional care unit so they can get out and do something.”

Presently, there are 41 active volunteers at Clark Regional, ranging from retirees to a couple high school students. Volunteers must work four hours a week, though they are welcome to work more.

Blackwell started volunteering after he retired from East Kentucky Power Cooperative a few years ago.

“I always knew I’d do something with my time,” he said. “I thought four hours wouldn’t kill me. Then four turned into eight.”

Hanks retired to Winchester after running her own business in Florida for years. Thirteen years ago, she started volunteering at the hospital.

“I volunteer with a couple other organizations,” she said. “I decided when I retired I’d volunteer. I had a friend who volunteered here … and I showed up.”

Like most volunteer groups, the auxiliary is looking to bolster their ranks as there are more projects coming and more needs to be met.

“We’re an aging workforce,” Blackwell said, “and we need more people coming in. We have one working weekly who’s 94.”

“They will not regret it, I promise,” Hanks said.