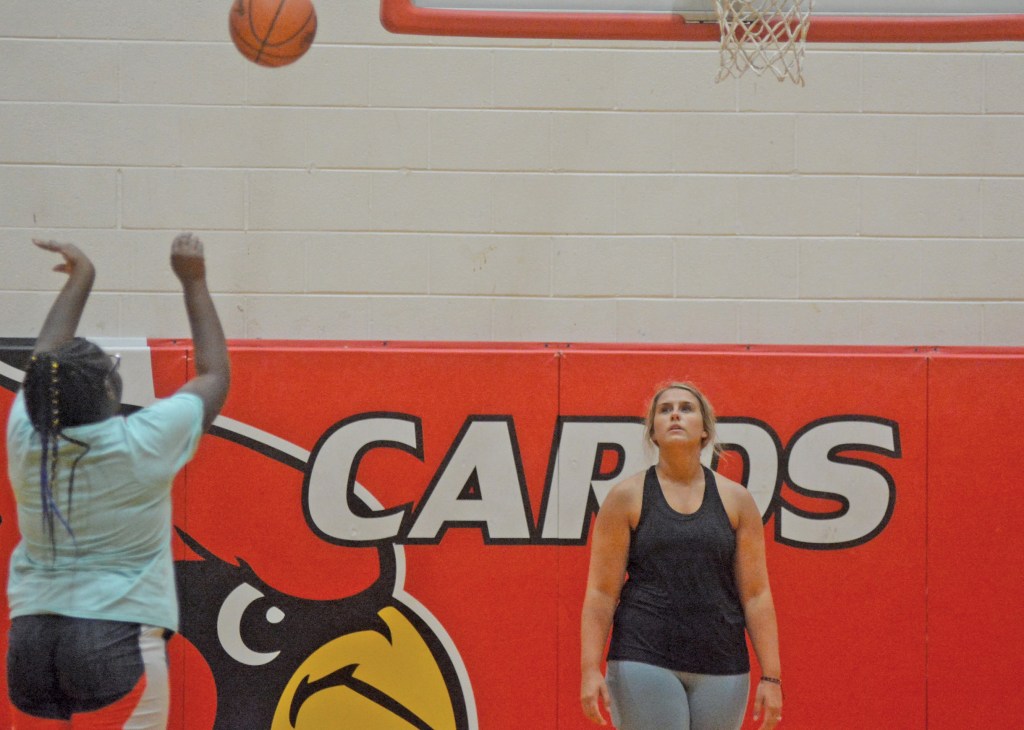 Seventh grade English teacher Jordan Gillum decided to start coaching basketball to help give back and is excited to see how the season unfolds. (Photo by Micah Satterly)

Robert D. Campbell girls hoops hosted an open gym to help players work on their skills and prepare them for the upcoming season.

Open gym allows players to get a feel for their skill level as well as an opportunity to improve their performance.

Team tryouts will be on Aug. 1 and 2 from 6 p.m. to 8 p.m. and players must participate on both dates to be considered for the team.

Alley Bolling and Jordan Gillum, both seventh grade teachers, are going into their first year on the coaching staff as assistant coaches.

Gillum said she is most excited to teach her players the purpose of the game.

“I am excited to get out there and work with the girls,” she said. “I want to help improve the program even though they already have a good tradition. I am excited to help build on to that and help them get ready for the high school level.”

Bolling is excited to watch the girls grow as players, but also individuals.

“I am ready to teach them things they can use on and off the court,” she said. “I want to help mold them to be better people and players throughout the year.”

Bolling and Gillum both admitted to being nervous as the season grows closer.

“We feel like we are walking into the unknown,” Bolling said. “We are not really sure what to expect and we have our own experiences, but to be in charge of these girls and to give them the best experience is kind of nerve-racking.”

Gillum said she decided to coach because she felt as if she was not giving back to people enough.

“I was doing ticket sales for my first job,” she said. “I really did not feel like I was making an impact on anything. I wanted to give back and help people learn what they want to do and grow. I am very excited to help with the sport I love and give back to these girls. Sports made me a better person and I feel like I have learned a lot through them.”

Bolling said she could not ask for a better lifestyle than what she has now because of her attachment to kids.

“I have always had a passion for kids,” she said. “Being in a classroom everyday with them has been awesome. Knowing you have taught them something and watching them grow into better people is so rewarding.”

Gillum and Bolling agreed on an aspect of the game they want to teach that is most important.

“Respect in general,” Bolling said. “We want to show them the rights and wrongs of the game and the outside world.”

“The things you can learn on a basketball court or on a football field all are the same,” Gillum said. “The discipline and dedication you have to have in all sports carries with you for the rest of your life.”

Head coach Tiara Bradbury said she wants the team to focus on conditioning for the offseason.

“We need to work on strength, endurance, speed and agility,” she said. “The girls need a good foundation built because a lot of them are coming up from fourth, fifth or sixth grade. We want to continue to build on that.”

Bradbury said she hopes to make an early impact to give them easier paths down the road.

“I have seen kids who did not know how to do a lay-up, shoot a free throw or dribble with their left hand,” she said. “I just want to build on their fundamentals so they do not struggle when the game is taken more serious for them as they get older.”

“My big things are work ethic and attitude,” she said. “Teaching in Clark County, I have realized that some people have work ethic and some do not. I want them to know that things are not given to you. You have to work at it to get to that next level. If you do not want or work for it then you are not going to get it.

Bradbury said she coaches because she had someone teach her the game when she was young.

“I always had someone there for me,” she said. “So I want to do it for them. Basketball is my greatest memory growing up. Having the coaches teach about the fundamentals as well as teamwork and work ethic helped me grow into the person I am and I want to help do that for them.”