Coach shares passion with her students 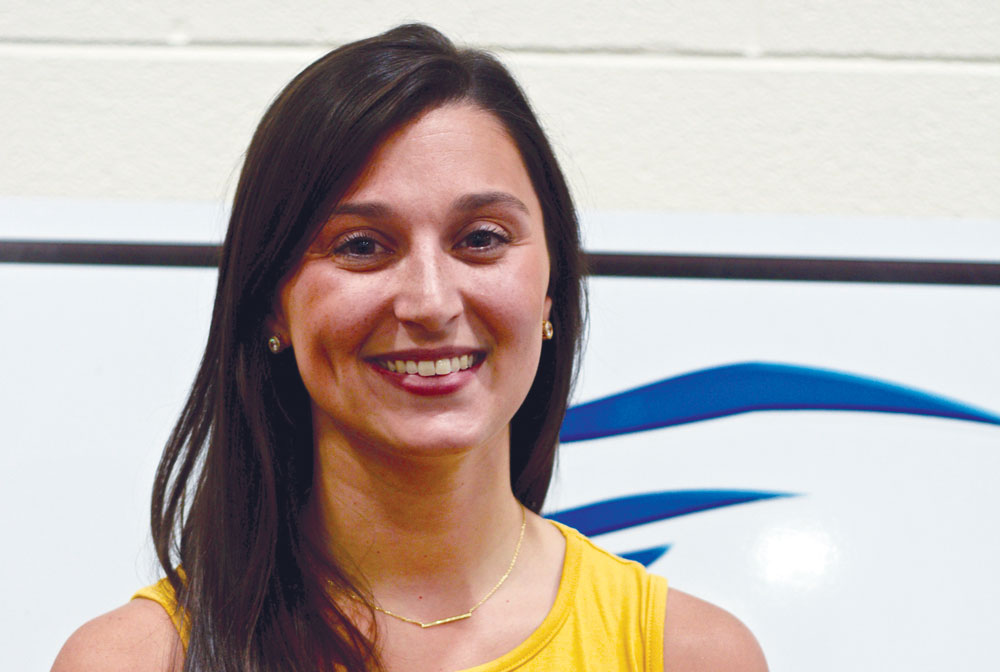 Elizabeth Rooney is a coach at Thoroughbred Gymnastics. (Photo by Lashana Harney)

Elizabeth Rooney came out of the womb flipping and flopping.

Well, at least that’s what her mom told her.

And 27 years later, she’s still flipping and flopping — or rather, she’s a fierce, graceful gymnast with a talent for power tumbling and coaching the craft to kids.

“Some kids, you just see they have that natural ability to do certain things,” Elizabeth said. “Unfortunately, I don’t know how. I just had it.”

Rooney, a Mount Sterling native, started gymnastics at age 3, inspired by her older sisters’ success in tumbling. She now is going into her third year as a gymnastics coach and instructor at Thoroughbred Gymnastics in Winchester.

Rooney knew about Thoroughbred Gymnastics growing up, but took lessons in Mount Sterling and competed with a team in Morehead. When she returned from living in Colorado, Rooney stumbled into a coaching job in Lexington before landing the gig with Thoroughbred.

Rooney teaches mostly preschool-age group classes as well as beginners and private lessons for any age.

Being a gymnastics coach wasn’t always the plan, though.

Rooney has a bachelor’s degree in social work but realized her passion was elsewhere.

“I’ve just always had a passion for gymnastics,” Rooney said. “When I was in gymnastics, my coaches had such a big impact on my life.”

She said she is going back to school for nursing but plans to keep coaching, too. Outside of coaching, Rooney said she enjoys tumbling in her spare time, taking her dog to the dog park and hanging out with her friends.

Rooney said her favorite part about being a coach is watching kids grow.

“Watching kids accomplish skills they never thought they were going to be able to do is such a good feeling,” she said. “I like being part of that.”

“As a coach, you never know it all,” she said. “There’s always room for growth and room to learn.”

One of the more challenging aspects of being a coach is watching students struggle with confidence, she said.

Each practice, Rooney sets a goal for her students. She likes to set short-term goals as well as long-term goals so students can feel accomplished, she said.

“I see so much talent, and they don’t see it, and they won’t put forth that effort, and I just see it all too often,” Rooney said.

Rooney said she’s had some students from the beginning, and seeing their progression over the two years has been rewarding.

“There are just certain things that will stick with me forever,” Rooney said. “I remember I had a little girl at the previous gym I worked with, and I was with her from start to finish, from when she started, and I had just started up until I left the facility. And probably about two years in, we’ve been working on this forward roll for two years … I don’t know what it was, but she was very scared to go upside down.

“But I remember one day, she just got up on that mat and did it … that was a good moment.”

Working with such young children, Rooney said the students are learning more than gymnastics. They are also learning about socialization, taking turns, waiting in lines, respect and more.

Rooney tries to exemplify the qualities of the good coaches she had throughout her gymnastics career: patience, friendliness and encouragement.

“I always trying to instill confidence in them and not to give up whether it’s in class or if it’s out in the real world, school, whatever,” Rooney said. “If you fall a couple of times, it’s okay. You just get back up. You keep trying.”

For Rooney, gymnastics taught her how to do things outside of her comfort zone.

Being a coach has also helped Rooney come out of her shell.

“I’m a very shy person,” Rooney said. “But this job has helped me a lot with that.”

Rooney said she encourages parents to sign their kids up for gymnastics classes or the summer camps.

“It’s a great skill, building life lessons, having fun … Who doesn’t love to come and jump on the trampoline? It’s a great way to get kids’ energy out,” she said.

Ideally, Rooney said she wants to own and run a gym one day.

But for now, she’s going to focus on pursuing her nursing degree as well as continuing to coach.

“I’m probably always going to keep my toes in the water,” Rooney said. “And if I’m not coaching full time, definitely part time … I’m on a good path right now.”