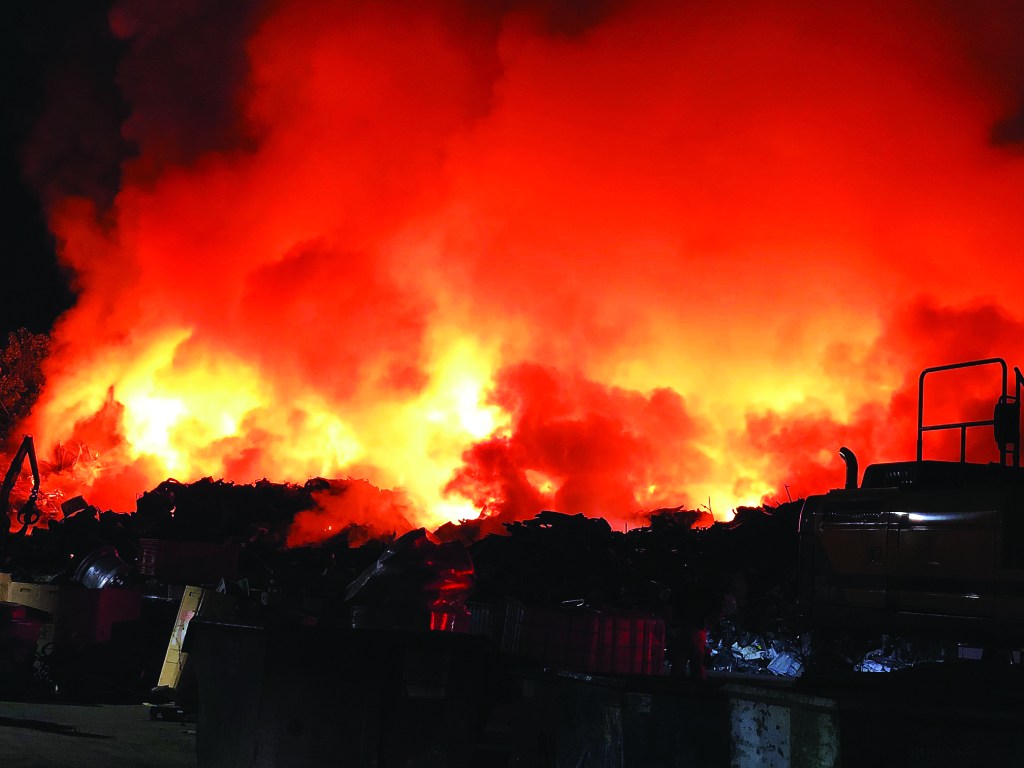 A fire at Stuff Recycling on Lexington Road was reported at 4 p.m. Saturday. After about 48 hours, the Clark County Fire Department continued working at the site to handle hot spots within a massive pile of debris from the fire. (Photo by Gail McCord, American Red Cross volunteer)

Although the flames of a massive weekend fire in Clark County are finally out, the incident has sparked some discussion among concerned residents and county government.

The Clark County Fiscal Court heard concerns in the public comments portion of its regular meeting Wednesday about how to better prepare for similar occurrences in the future, and magistrates agreed beefing up emergency response equipment for the fire department would be a good idea.

Information provided by Clark County Fire Chief Ernie Barnes and neighboring residents during the meeting indicated water supply in the area was an obstacle while battling the fire.

“We got the call at about 4:06 p.m. Saturday there was fire in a debris pile at Stuff’s,” Barnes told the court. “The first responding units got there and actually made a pretty quick knock out on the initial fire. They went into the overhaul phase, but they ran out of water and the fire spread back out by the time they could get a good water supply.”

By 4:35 p.m., a second alarm was called out. And shortly after, mutual aid from surrounding communities began, he said.

Because of the limited water supply, Barnes said a tanker shuttle operation, or a plan to haul water to the scene, was established.

“To my knowledge, this was the largest tanker shuttle operation in the state’s history,” he said.

It involved thousands of gallons of water and hundreds of trips of sometimes three to six miles, he said.

With the nearest hydrants at Clark Regional Medical Center, nearby Stanley Pipeline and the Verna Hills neighborhood, firefighters still struggled to fill tankers quickly enough because of pressure concerns on the hydrants.

BJ Swope, who operates Swope’s Boat Repair located across the street for Stuff Recycling on Lexington Road, told the court he has been concerned about the safety of the businesses and residents in the area since the fire started Saturday evening. Swope said he was particularly concerned that the hydrant infrastructure in the area was not suitable, considering the various industrial-type businesses, residential areas and even a large church nearby.

Swipe told the court he wanted the county to be proactive instead of reactive.

“There was a fire out on Lexington Road in 2008 and it was a similar scenario,” he said. “They ran out of water. They had a pond right next to the fire, but not the equipment to use that water. They have the personnel to fight these fires, but not the proper equipment.”

Swope said he would like to see the county purchase additional equipment and  upgrade the existing equipment. Barnes said the county has one tanker truck that is 27 years old.

The magistrates discussed the possibility of adding hydrants in that part of the county and agreed adding a tanker to the department’s line-up would likely be feasible.

No action was taken in Wednesday’s meeting, but Branham asked Barnes to consider the discussion as he continues drafting a new fire protection plan for the community.

In other business, the court:

— Approved KACO Insurance as the carrier for general lines and worker’s compensation insurance for fiscal year 2017-18.

— Heard proposals from Chris Parker of Winchester Insurance Agency and Danny Neely of Neely and Wade Insurance to be  the local agent of record for the Clark County Fiscal Court. The court voted to table motion on the topic until a recommendation could be made from the insurance committee.

— Hired Perri Wilson as a part-time administration, automation and operations specialist for CSEPP.

The next meeting of the Clark County Fiscal Court will be at 9:30 a.m. Wednesday, June 27. Agenda items will include the second reading of a joint city-county sign ordinance and the fiscal year 2018-19 budget.