Hello, my fellow wise guys and gals of Winchester.

I like to believe most us are hardworking, law-abiding citizens doing our best to be decent human beings and to not dishonor to our family’s name, our friends and ourselves.

In a town this size, it doesn’t take long before you start to know a lot of the citizens, so your reputation must be guarded more so than living in a metropolis the size of New York City or Philadelphia.

Like many of you, I try to set a good example for my wife, children and neighbors. With that being said, I am fascinated with criminology and the psychology of why men turn bad or what makes them tick.

I’m not in the minority by really enjoying films based on the mafia, as this topic is always popular. Just look at primetime cable showcasing several shows, documentaries and endless reruns of the always popular, “The Sopranos” (1999-2007). Bada-bing!

Why are such stories filled with murder, crimes that run the gambit and corruption so popular in our culture? Because we are safe when watching this genre of film.

It is, hopefully, the closest we get to the underbelly of society with its lack of concern for laws, love and life.

In a way, for 90 minutes, we are there in the thick of it with these thugs. Though I would never associate with such characters in real life, it is kind of exciting watching the wise-guy life on the screen.

The following are just a few titles worth mentioning to check out when you have some free time from loading your Tommy gun or picking the lint from your fedora.

Kentucky’s own, D.W. Griffith, released the short film “The Musketeers of Pig Alley” (1912) portraying the streets of the Big Apple run rampant with evil hoods quick to fight, steal and kill.

The gangster film genre didn’t add any other titles worth mentioning until the 1930s approached.

The ‘30s has much source material for the genre taken from the papers on real-life mob boss Al Capone. Capone’s rise to fame through the prohibition and depression saw he and his associates rule the streets with dominance which produced a lot of money for the mob, and a lot of violence with his enemies being whacked.

The Production Code was established by the power that be and these types of films along with horror had to abide to strict guidelines for a film to pass approval before it could be released to the public.

When the suits started to loosen their ties while the traditional studio system was failing and social ideals were changing, 1967 saw the release with Roger Corman’s “The St. Valentine’s Day Massacre.”

New Hollywood emerged and Francis Ford Coppola’s award-winning, “The Godfather” (1973) took America by storm as he completed the crime family saga as a trilogy with 1974’s “The Godfather: Part II” (which was screened at the Kentucky Theater this month), and 1990’s “The Godfather: Part III” (1990). Other 1970s honorable mentions are the quirky “The Gang that Couldn’t Shoot Straight” (1971), and Martin Scorsese’s “Mean Streets”. 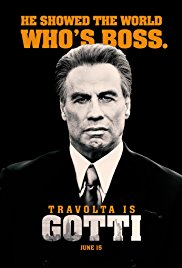 Today, John Travolta’s “Gotti” is released as he portrays the Teflon Don, which ruled the notorious Gambino crime family in the ‘80s.

If you like this genre or a good crime story, then check out one of the mentioned titles with your crew over some good cannoli.

Thanks for being part of Winchester’s Cinema Cosa Nostra.

Have a film-tastic day and don’t be a rat.