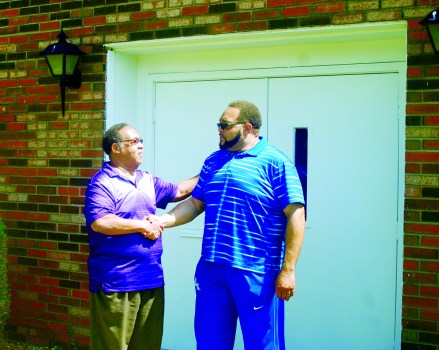 The Rev. Kenny Clay Sr., left, shakes the hand of son Kenny Clay Jr., as he prepares to open Kingdom Word Ministries in the former St. Andrew AME Church on Walnut Street Sunday. Clay Sr. was paster at St. Andrew when the building was constructed more than 30 years ago. (Photo by Fred Petke) 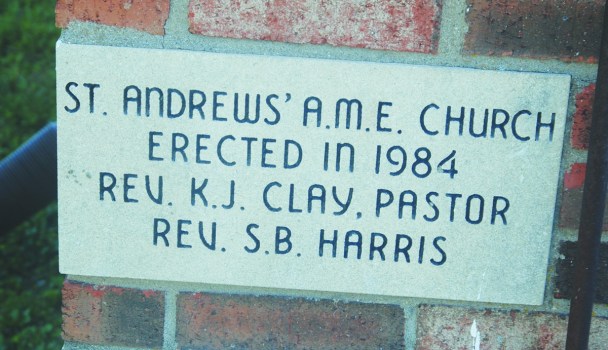 For Kenny Clay Jr., it’s returning to his hometown to start a new campus for Kingdom Word Fellowship, his Lexington-based non-denominational church.

For his father Rev. Kenny Clay Sr., it’s returning to a church he helped build more than 30 years ago.

For both, it’s a time to come home. 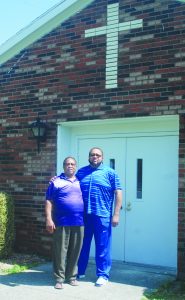 Clay Sr. was appointed pastor at St. Andrew around 1979, and moved his family to Winchester. He helped lead the church through the building project.

In the AME church, pastors are appointed annually to charges by the bishop, upon recommendations by the presiding elder, according to the denomination’s website. Pastors are often relocated after a few years, which happened to Clay Sr. after the St. Andrew building was completed.

“I built the church and three months later they moved me,” Clay Sr. said. “That’s the way the Methodist church is.”

There was a promise Clay Sr. would return to Winchester.

“When I built this church 34 years ago, the vision God gave me was to come back and finish,” Clay Sr. said. “He told me, ‘You’ll be back. Don’t worry about it.’”

The property became available in March after the church was closed after the congregation dwindled to a few. The Clays were able to purchase the property and the building, and have been renovating it during the last couple months.

Clay Jr. and his wife Valerie will be the lead pastors while Clay Sr. will be the “overseer.”

“For me, it’s been 30 years since I lived in Winchester,” Clay Jr. said. “It’s an honor to be able to come back and serve in this way. Our ministry is different from ministries here.”

Clay Jr. said the church will emphasize practical Biblical teaching and praise and worship, while starting programs for drug and addiction counseling, marriage and family counseling, youth development and children’s ministries, among others.

“The ironic thing is I’ll pastor some of the people (Clay Sr.) used to pastor and baptized,” Clay Jr. said.

Regular services will be at 9:30 a.m. Sundays, to allow Clay Jr. time to return to the church’s Lexington location for its service, he said.