Where in the World: Early road building in Clark County 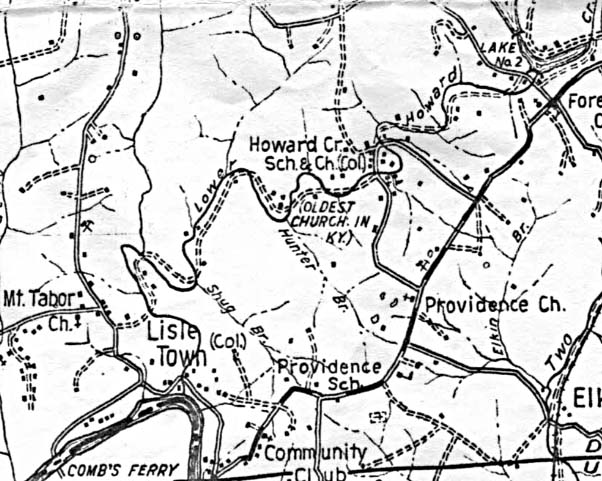 Lower Howard’s Creek Road is shown by the double dashed line beginning at the upper right corner of the map and following the creek. (Taken from C. D. Hunter’s 1926 Map of Clark County, Kentucky Geological Survey.)

Roads played a vital role in the development of Clark County.

They were essential for getting citizens to the county seat, to church, to mills and market, and for connecting to a growing network of Kentucky communities.

Nearly every session of court in Clark County beginning in 1793 dealt with roads because of its importance.

The county clerk duly recorded its formation and subsequent changes over time.

Fortunately, these records have been preserved and are available in the order books at the county clerk’s office.

Authority for building and maintaining roads was vested in the county courts and based on the system in place in Virginia that, in turn, had been derived from English practice.

The process depended on individual initiative. Any person could petition the court to have a road opened or altered.

The court then appointed three or more landowners to view the route of the proposed road and report to the court if it would be a public convenience.

In October 1796, the court ordered “William Trimble, Sam Smith, Philip Bush Sr. & Isham Allen or any three of them being first sworn view and mark out the nearest and best way for a road from [Orson] Martins Saw Mill near Isham Allens, also from [blank] mill on Howards Creek to the Stone Meetinghouse passing by Bryans and Martins mills & make report thereof to the next Court.”

Any landowner opposing the road could file a complaint, and the court would appoint a jury to visit the property and assess the potential damages.

If the road were approved, the court would pay damages out of the county levy.

The law required local citizens to construct and repair county roads, and the court appointed overseers to superintend the work.

In May 1797, the court approved a new road down Lower Howard’s Creek.

“The persons appointed to lay off the road from William Trimble’s spring branch made report that they had viewed & marked out the nearest & best way for the said Road to run. On consideration whereof it is Ordered that this Road so laid off be established, William Hays appointed Overseer Thereof. William McMillan & William Trimble allott the hands to attend & assist the Overseer in Clearing & repairing the same when required.”

The “hands” were able-bodied males 16 years of age and over living in the area who were required to work on the roads without pay and to use their tools.

Overseers called out the hands to build or repair the roads, as needed. The court could fine citizens for failing to show up for work or provide a substitute.

Overseers could impound rock, timber, wagons, oxen and drivers, for which the court reimbursed owners from the county levy.

They also had to provide appropriate road signage.

Overseers frequently got hauled into court for failing to keep their roads maintained.

In October 1803, a grand jury charged William Trimble, “overseer of the road leading from Capt. [Samuel R.] Combs to the first ford above Martin’s mill for being out of repair generally in the space of six months past.” The charges were brought by jurors Philip Bush and William N. Lane “living on the waters of Lower Howards creek.” (Seems a bit unfair, as Trimble had only replaced William Hays as overseer the previous month.)

In October 1805, John Quisenberry was charged “for not keeping up a sign board at the fork of the road at the end of Orson Martin’s mill dam” on Lower Howard’s Creek.

Roads were usually required to be 30 feet wide and suitable for the passage of wagons.

Most were crude affairs constructed simply by cutting trees and removing the underbrush to form an unobstructed path.

Since ordinary citizens had little expertise in this practice, most roads were poorly constructed and nearly impassable during winter and spring rains.

They were a source of constant complaints from residents and visitors.

In areas where roads were particularly bad, hands might have to spend as many as 40 days a year working for the overseer. Even so, the Kentucky General Assembly did not attempt to change the old system until 1830.

That year they passed a law that allowed counties to collect taxes to pay for road construction, which would end the requirement for compulsory labor.

They soon learned that citizens despised paying taxes even more than they hated forced labor.

When Fayette, the most prosperous county, refused to implement this “tax increase,” the General Assembly repealed the new system.

Some relief was provided during the turnpike road era, which allowed Kentucky entrepreneurs to construct toll roads — the subject of my next column.

While the destinations of many early roads remain unchanged today, the actual routes of these roads have repeatedly been altered.

However, there are a few places where roads, constrained by geography, had to follow a narrow path.

For instance, the ancient roadbed — referred to in the court records cited above — was used into modern times.

The road down Lower Howard’s Creek was a critical transportation link for the many early industries located in the valley.

The road began near the present reservoir, where the road from Winchester — now called Old Boonesboro Road—struck the creek.

From there it followed the Bush Mill Road out of the valley.

It was used throughout the 19th and most of the 20th century.

There are photographs showing portions of the road in use in 1938. The road, though never paved, was maintained by the county.

Although the section that followed the creek fell out of use when the valley was depopulated in the mid-1900s, the route is still easily traceable on the ground today.

Portions of the road located in the Lower Howard’s Creek Nature & Heritage Preserve have been restored.