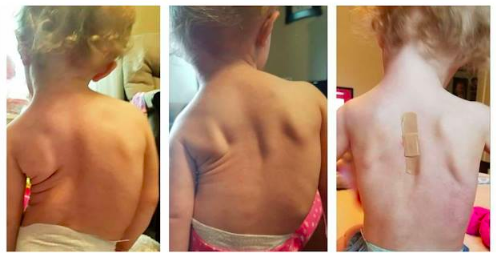 Photos show two-year-old Clara Watts’ progression through Mehta casting from before her first cast, far left, to May of this year, far right. (Photo submitted)

Of course, Clara has had to be.

At just two years old, Clara has endured and overcome more medically than most adults.

While she was still pregnant with Clara, Kayla’s placenta began to deteriorate. She delivered Clara at 36 weeks, weighing just 5 pounds and 4 ounces.

As an infant, Clara was diagnosed with torticollis, which is translated as “twisted neck” in Latin. It’s characterized by tightened muscles on the right side of her neck and extremely loose muscles on her left side. It causes Clara’s head to tilt to the right.

At seven months old, Clara began being treated for the torticollis at Shriner’s Hospital for Children. It’s there she is also treated for scoliosis, which was discovered in a visit to Cincinnati Children’s Hospital to get a second opinion about her torticollis, Kayla said.

Kayla had previously noticed that Clara’s spine had a slight curvature when she was sitting up. But thought it was her compensating for the torticollis.

“Cincinnati Children’s Hospital found the scoliosis,” Kayla said. “They were doing an X-Ray to see if there was some other underlying cause for her tilted head besides torticollis. They found the scoliosis in the X-Ray. I didn’t even know that babies at that age could have scoliosis.”

Scoliosis is prevalent, affecting about 3 percent of the U.S. population and is the most common spinal deformity, according to the National Scoliosis Foundation. 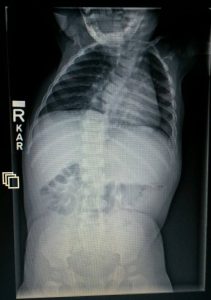 An X-ray shows a curvature in the spine of two-year-old Clara Watts. Clara’s mother, Kayla, is using her story to raise awareness about the importance of early detection during Scoliosis Awareness Month.

“Even after seeing the X-ray, I was still in denial,” Kayla said. “No one wants to think anything is wrong with their child.”

“That’s considered severe,” Kayla said. “Anything above 10 degrees is diagnosed, but hers was at 50 degrees.”

Though it began barely more than a year ago, Clara’s scoliosis journey has been a long one, full of questions and uncertainties, even feelings of guilt on Kayla’s part.

“Scoliosis can be hereditary,” Kayla said. “I do have an aunt with slight scoliosis. But they also thought Clara’s might have been caused by my restricted uterine growth. It was something I had with both my kids, but it didn’t affect Emma (Clara’s six-year-old sister) as much.

“I felt guilty because in the womb is when your baby is supposed to be safe. Nothing can hurt it. But she was worse off inside me than she was out and that was hard for me to deal with … to think that I may have caused her to be in this condition.”

After multiple tests to rule out other causes, including an MRI to check for any neurological issues, Clara’s doctors developed a treatment plan.

In August 2017, Clara began the process of Mehta casting, which is considered the most effective treatment for childhood scoliosis, at Shriner’s.

“She gets a plaster cast on her torso and it has a small hole on the back left side where her rib is and then a hole for her belly and a cutout at the sternum,” Kayla said. “It basically trains her spine to grow straight as she grows. Her doctor said this is the most flexible time that her spine could be trained. This time is critical to try to get her treatment going and ongoing to make sure that it straightens her out hopefully.”

After five casts back to back with no breaks, Clara’s curvature had improved to 33 degrees in May. This summer, her doctors have given her a brace to use that is much like her casts but can be removed. She wears is 23 hours a day, offering her an hour each day to feel more like an average kid, Kayla said.

“In that hour she can play, she can bend, she can get a bath or play in the water or she can just curl up with me on the recliner, which she can’t do when she has her casts on,” Kayla said.

The casts limit Clara is ways many would take for granted, Kayla said.

She can’t get hot because excessive sweating can cause the cast to get wet. She has to wear a special bib to reduce spills of juice or food. She can’t take a traditional bath and it makes washing her hair extremely difficult.

“Diaper changes are so hard because the diaper has to be tucked under her cast,” Kayla said. “We have to watch her extra close when she gets a simple cold because her lung expansion is restricted and it could go into pneumonia a lot faster. When she got a fever, we had to work harder to keep her body temp down because the cast held that in even more.”

Beyond making adjustments in day-to-day life, Kayla said Clara’s journey has been most difficult because of the uncertainty and unanswered questions.

“Frustration was a huge thing for me because every doctor’s appointment we went to, we were expecting an answer, but we ended up getting more questions and more tests,” Kayla said. “And that’s still so true today.”

The hope is when Clara is casted again in October, she will have maintained her improved curvature. Doctor’s hope Clara will get as close to 10 degrees in her curve as possible. But many other factors in her health will contribute to those results.

“At this time, she has not gained or lost anything since January,” Kayla said. “It’s just a waiting game. We have to wait until we start casting again in October.

“We’ll do the same process — cast all the way up to May of next year. This time next year, we’ll know if we’ll get to that point or if we’re just buying time until she’s going to have surgery.”

As Kayla and her husband, Josh, wait for answers, they also continue gleaning valuable lessons from their toddler.

“She has taught me so much about strength, not just in the physical but in the mental,” Kayla said. “She has endured so much already in her short amount of time on this earth. It has not only inspired me, but Josh, or Emma or our church family or my family to keep pushing and keep fighting for her. 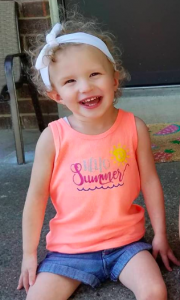 “She has already shown so much strength through everything that we’ve been through that it is inspiring.”

Kayla also attributes her family’s faith to overcoming so many obstacles.

“We pray a lot and we come together with our church family to pray for her often,” Kayla said. “Emma even loves putting in prayer requests for her little sister and sharing her story with others.”

Clara’s story has also inspired Kayla to raise awareness about scoliosis and the importance of early detection, particularly this month, which is Scoliosis Awareness Month.

“If it was not for us having early detection with Clara, then we wouldn’t have got that critical timeframe to get her treatment in and such good results from it. And it only takes truly 30 seconds to even get the screening done,” she said.

According to the National Scoliosis Foundation, diagnosing scoliosis in its early stages ensures the most options for treating the curvature and slowing or stopping the progression. Children’s bones are not yet fully hardened, so non-surgical treatments like bracing may be used to prevent progression of the curvature.

Many students are given the Adam’s Forward Bend Test in school, typically when they are in fifth or sixth grade, to determine whether or not they may have scoliosis. However, many schools do not do these screenings, so it is advisable to make sure the screening is done as part of a child’s annual physical exam with a pediatrician.

According to NSF, scoliosis, when left untreated, can get worse and may cause chronic back pain, impact heart and lung function and take a toll on self-esteem.

Some physical signs to look for include any type of hump or uneven appearance around the area of the rib cage, side-to-side asymmetry in the spine, shoulders that appear to be different heights or one hip that sticks out more prominently than the other.